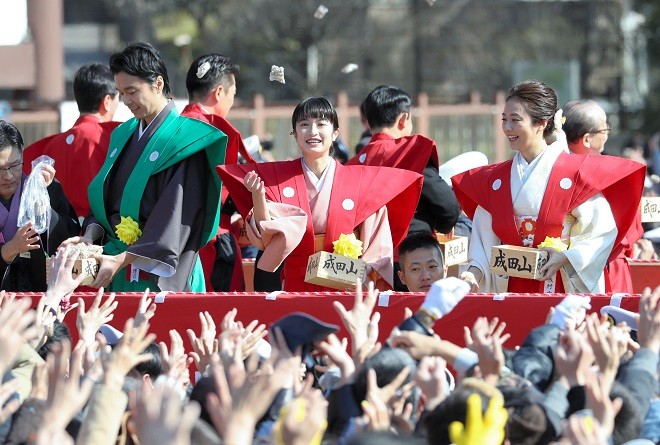 Actors Hiroki Hasegawa, left, Mugi Kadowaki, center, and Fumino Kimura, right, throw beans in the Setsubun festival on Feb. 3, 2020, at Naritasan Shinshoji temple in Narita, Chiba Prefecture. This year, shrines throughout Japan have either canceled or scaled down their traditional Setsubun bean-scattering events due to the new coronavirus pandemic. (Asahi Shimbun file photo)

If you throw beans on Feb. 3 as is a tradition in Japan, this year you might be out of luck, according to the National Astronomical Observatory of Japan (NAOJ).

That's because the Setsubun tradition, where citizens toss beans nationwide while ritually shouting, “Oni wa soto! Fuku wa uchi!” (“Demons out! Good fortune in!”), should be done on Feb. 2, for the first time in 124 years.

"Be careful as the festival will take place on a different day than usual if you want to scatter beans,” said Masato Katayama, head of the NAOJ’s Ephemeris Computation Office.

This is because it does not take exactly 365 days for the Earth to travel around the sun. Setsubun is defined as the day before the beginning of spring by the traditional 24-season calendar.

As the arrival of spring is determined based on the locations of the sun and Earth like the spring and autumnal equinox, the NAOJ announces its date in a government gazette in the previous year.

According to the NAOJ, the Earth’s orbit around the sun requires 365 days plus less than six hours. This amounts to about 24 hours in four years, so a leap year occurs once every four years to add Feb. 29 to the calendar.

The correction method, however, results in an extra 45 minutes, which means three days need to be deleted over 400 years. Because of that, the leap year is omitted centennially, except the 400th year, in the Gregorian calendar to cut three leap years over 400 years.

As a result, different dates are frequently allocated to Setsubun and other seasonal events during centuries around 2000 and other multiples of 400.

For the very same reason, the spring equinox more often comes on March 20, not March 21, while the autumnal equinox is Sept. 22 instead of Sept. 23 on many occasions.