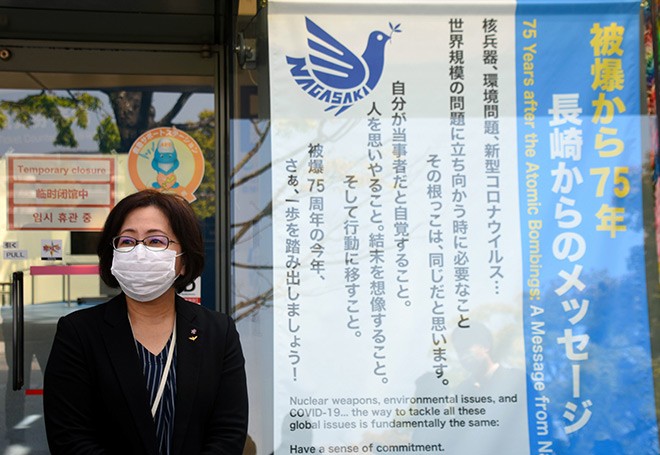 Keiko Shinozaki, director of the Nagasaki Atomic Bomb Museum, stands beside “A Message from Nagasaki” at the museum’s entrance on April 10. (Asahi Shimbun file photo)

A signboard, “A Message from Nagasaki,” went up on April 10 last year at the entrance to the Nagasaki Atomic Bomb Museum.

The museum had decided to step up campaigns to rid the world of nuclear weapons in 2020 as Japan marked the 75th anniversary of its atomic bombings. But it was forced to temporarily close its doors the same day due to the novel coronavirus pandemic.

It says tackling these issues fundamentally requires the same approach: “Have a sense of commitment. Extend compassion to others. Imagine the consequences. Take action.”

People have learned that anyone can become infected with the novel coronavirus. They have also learned that each and every one of them needs to keep their behavior in check by imagining the “consequences” of the spread of infections.

The message conveyed the desire of Nagasaki city government officials, before closing the museum, to underscore that the issues of nuclear weapons and global warming also require everyone’s “commitment” and “action.”

The museum reopened last June, and the message still remains at the entrance.

The pandemic has come to blanket the entire world at a speed that defies a historical equivalent.

The Earth’s environment has entered the phase of a “climate crisis.”

And the “Doomsday Clock” of the Bulletin of the Atomic Scientists, a yardstick of the perceived threat of nuclear catastrophe, was revised last year to “100 seconds to midnight,” the closest it has been to the purported end of humankind.

All of these developments represent classes of giant, global risks that modern civilization has engendered.

We are reminded of a passage from a report issued by the government’s Reconstruction Design Council three and a half months after the 2011 earthquake and tsunami disaster and the Fukushima nuclear accident.

“Does this not question the very character of our civilization?” it asked.

The civilization, which was meant to make humankind more affluent, had turned against it. We should take that paradox deeply to heart again.

The emergency the world faces under the pandemic has highlighted and amplified a number of pre-existing problems, including unbridled human intervention in ecosystems and overpopulation of urban areas.

Public health care systems ended up collapsing in some parts of the world, where excessive emphasis on efficiency led to a shortfall of surplus capacity.

Light has been shed on the roles of “essential workers,” such as nurses, caregivers and those engaged in commodity logistics, who support our daily lives. At the same time, teleworking has become more widespread and digitization is expected to gather speed.

Under the circumstances, the gap in labor conditions between those able to work remotely and digitally versus those who cannot has emerged as a point of contention.

We are called on to come up with answers to these challenges. That is another heavy burden facing society still grappling to curb a further spread of infections.

Interestingly though, momentum is gaining for combining a rebirth of the economy, which has been hurt by the pandemic, with efforts to fight climate change, such as going carbon-free and preserving ecosystems.

Called “green recovery,” the approach is not just about getting the economy back and running, but running after two hares, also by paying attention to the environment and envisioning the future we will leave for future generations.

That could be called a paradigm shift from the old dichotomy of “lives versus the economy,” which has so often been on our lips.

In this aspect, there will be a sea change this year in the international community. The United States is returning to the Paris Agreement, a framework for reducing greenhouse gas emissions, under the incoming administration of President-elect Joe Biden.

The Japanese government in October also came up with a goal of net zero greenhouse gas emissions in 2050. Under pressure from a global trend, the country has decided to “change the way of thinking,” in the words of Prime Minister Yoshihide Suga.

As for the Doomsday Clock, we are left to wonder if it will be possible to pull back its hands.

The Treaty on the Prohibition of Nuclear Weapons is scheduled to take effect on Jan. 22. Establishment of that international norm, which defines nuclear arms as inhuman and illegal, will mark a major step toward realizing a world without nuclear weapons.

Survivors of the atomic bombings of Hiroshima and Nagasaki, along with citizens around the world organized under an international nongovernmental group, staged campaigns and worked jointly with the governments of willing nations in achieving that goal.

The United States, Russia and other nuclear weapons states, as well as Japan and other countries under a nuclear umbrella, have turned their backs on the treaty. They have yet to break with nuclear deterrence theory based on a “balance of terror.”

The world remains cheek by jowl with the danger of an accidental nuclear catastrophe.

We cannot afford to go on like this forever. The hands of the clock could move forward or backward depending on whether we will awake to the crisis.

PLAYERS OF FUTURE IN ACTION

Kyoji Watanabe, a scholar of the history of thought, wrote a short essay following the Fukushima nuclear disaster a decade ago.

“It is not something that began only yesterday or today that humankind has to change the way it is and the way it is getting along,” he said in the article contained in the book “Mito no No wo Sugite” (Past an untrodden field). “In other words, the time is ripe.”

There are mountains that refuse to budge an inch despite clear signs of a change in trends. The year 2021 represents a golden opportunity to redouble efforts to budge those mountains.

It is reassuring that members of younger generations, such as environmental activist Greta Thunberg, are raising their voices in a variety of domains.

Central players of a future society are spearheading moves to ask the question of whether humankind will remain sustainable in just the way it is.