Yoshikawa said to have got more millions from egg producer 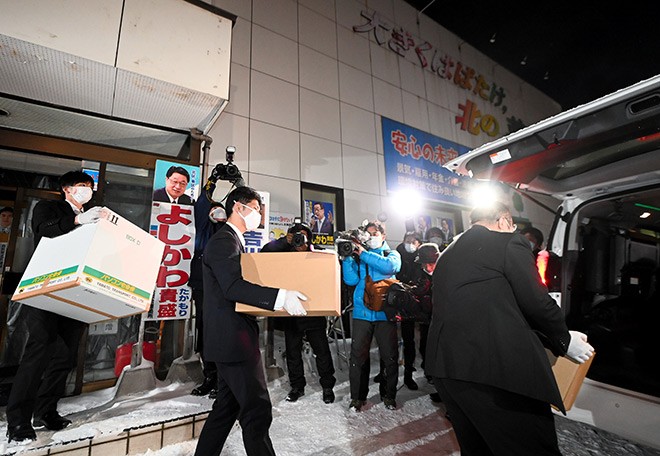 A former agriculture minister under investigation for receiving money from a major egg producing company apparently also accepted additional funds before and after he served as a Cabinet member.

Tokyo prosecutors believe Yoshikawa received 5 million yen ($48,000) while he served as minister of agriculture, forestry and fisheries between October 2018 and September 2019 from the former top executive of Akita Foods Co., a Hiroshima Prefecture-based egg producer.

The former company representative has also been questioned by investigators. He has admitted to giving Yoshikawa a total of 13 million yen from as far back as August 2015 and until June 2020, sources said.

Prosecutors are moving toward indicting Yoshikawa on a bribery charge for the 5 million yen he received as farm minister, sources close to the investigation said.

The former Akita Foods official said he asked Yoshikawa to ensure the ministry expressed opposition to an international organization’s proposal for animal welfare standards to reduce the stress of livestock.

Japan ended up objecting to the proposed standards, which would have forced Japanese poultry farms to spend large sums to upgrade their facilities.

Prosecutors have also been looking into the additional payments to Yoshikawa. However, none of the political groups associated with Yoshikawa have listed any of the payments from Akita Foods on annual political fund reports.

Prosecutors perused payment records as well as the schedule diary of the former Akita Foods official to determine when and how much money was handed over to Yoshikawa. Sources said the former executive gave Yoshikawa the money at the lawmaker’s office in Tokyo and did not receive a receipt.

No comment was available from Yoshikawa’s office as of Dec. 31.

Although Yoshikawa initially insisted that he received no money from Akita Foods, he reversed course during voluntary questioning by prosecutors. He admitted receiving the money but told investigators he had planned to return the funds.

But the former Akita Foods official has said the money was not a loan and that the amounts given over many years were simply to promote the interests of the egg industry.