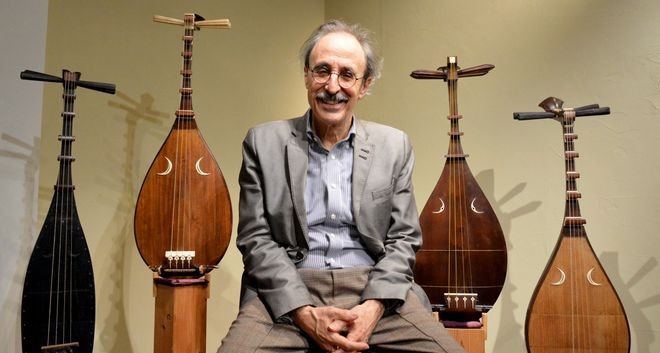 FUKUOKA--Raised in Rome, Doriano Sulis studied classic guitar before he married a Japanese woman and moved here 47 years ago.

But Sulis, 73, has never felt homesick, thanks to a traditional Japanese instrument.

“Because I came across the ‘biwa,’” he said.

One day, he heard an intriguing instrument being played on the radio, which sounded more modern than the violin or the guitar.

It was the sound of the biwa (lute). The instrument is believed to have arrived in Japan during the Nara Period (710-784).

When he was 28, Sulis went to see a Chikuzen-style biwa artisan and became his apprentice.

Unable to understand the master’s Hakata dialect, the Italian had to learn biwa-making by following his example.

Sulis currently repairs and makes the biwa. Each time he examines a biwa for repairs, he is amazed by how sophisticated the craftsmanship techniques were in olden times.

Out of respect for the intentions of the makers, Sulis opts to use old wood to make the repaired sections look less conspicuous. He has collected several hundred saws and files to deal with various sizes and shapes.

Sulis was hospitalized for a brain hemorrhage in 2018. Feeling a sense of crisis that the biwa-making techniques could be lost, he decided to offer a class to nurture Japanese artisans and teach them the skills he learned.

Sulis also gained support through a crowdfunding campaign to rent a venue for the class and has taken on two apprentices.

The venue called Biwakan (house of biwa) is scheduled to open in April. He also plans to give classes to learn how to play the instrument, as well as teach about its long history.

The Italian held his first solo exhibition in December to showcase the biwa he has repaired over the years.

The biggest charm of the biwa is that there is no format and each is different from the other.

“It’s like ‘sculptures that produce sounds,'” Sulis said. “I hope those who are not familiar will have an encounter like I did.”