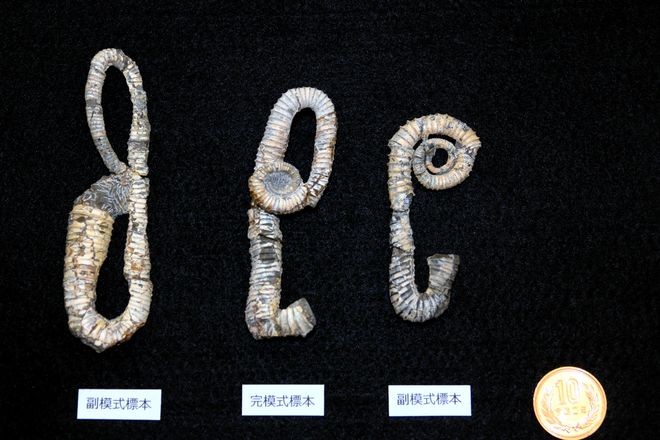 Fossils of “Sormaites teshioensis,” a new type of ammonite with irregular whorls, in Tokyo on Dec. 24 (Toshihiko Katsuda)

Fossils found in the northern part of Hokkaido are a new type of ammonite, the once-ubiquitous spiral-shelled creatures that went extinct with the dinosaurs 65 million years ago, researchers said.

Yusuke Muramiya and other researchers from the Fukada Geological Institute discovered three ammonite fossils shaped like paper clips and featuring irregular whorls in the town of Nakagawa in 2015 and 2018.

They said the fossils are different from other ammonites at the genus level because their irregular paper-clip pattern starts to curl up in a regular whorl.

It was the first new type of ammonite found in Japan in 37 years. The discovery was announced in the academic journal Palaeontological Society of Japan on Jan. 1.

The new ammonite was named “Sormaites teshioensis,” based on the old name of the local area, which includes Nakagawa town, a place world-famous for its abundance of ammonite fossils.

“Those ammonites might have stored gases inside their shells and stood on the sea floor with the buoyancy force,” Muramiya said.

The ammonite belonged to the same group as octopi, squid and nautilidae.

The new ammonite fossils will be displayed at the Nakagawa Ecomuseum Center from Jan. 18 through Sept. 30.