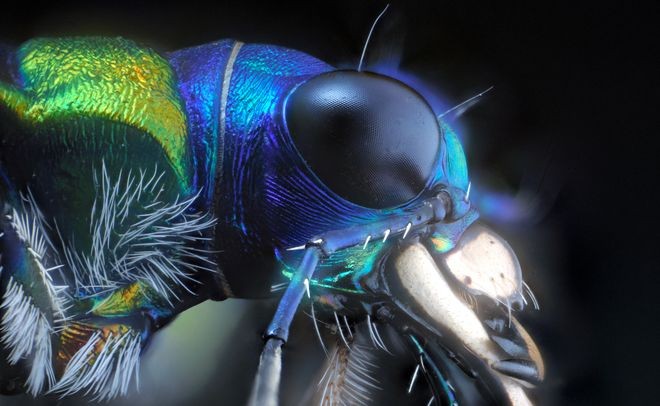 TAKA, Hyogo Prefecture--If it wasn't for a fly, Yusei Hara might never have got hooked on photographing insects. His intimate close-ups of bugs that often reduce humans to screaming fits are the subject of a stunning book.

“Completely contrary to my expectations, it had a very a good figure,” the Buddhist priest said.

The insect's beauty wasn't apparent to Hara when he initially pointed his camera at a flower in the garden. But then he noticed a fly perched on a leaf and snapped off a shot.

It was only after he developed the film and enlarged the photo that he was struck by the insect's appearance.

He later learned it was a member of the long-legged fly species. Captivated by its seemingly perfect design, the priest became eager to learn more about it and other insects. This developed into an avid interest for photographing insects.

Fast forward and Hara has now spent a decade being a fly on the wall, so to speak, to capture the mesmerizing microcosmic world of insects, the world’s most diverse group of organisms, in a larger than life manner.

“Humans act as if they are the main characters on this planet, but insects also co-exist with us,” Hara said. “They are essential to us to live on this planet together.”

It's a big change in attitude for the self-taught photographer, who admits that before he stumbled on that special bug while training to become a priest at Wakayama Prefecture's Mount Koyasan, his view of the flies he encountered in the kitchen there was simply that they were filthy pests.

The results of his artistic efforts grace the pages of his book of photos released in September by Yama-kei Publishers Co. titled “Utsukushiki Chiisana Mushi-tachi no Zukan (Illustrated encyclopedia of beautiful, small insects).

Among the striking images is one with glowing rainbow-colored wings, another memorable for its bushy head and one with numerous eyes that resemble shiny metal.

Now 53, and serving as a priest at an ancient temple of the Shingon sect here, Hara says when he holds his breath and focuses his full attention on them, he can find a whole “universe” in insects.

His book introduces 100 or so insect species living in gardens, parks and other familiar locations.

Many of the insects, such as a small parasite bee, a fly and a moth, may be insignificant. But their appearances are disturbingly beautiful.

The Andromeda lace bug, which is about 3 millimeters in length, has purplish wings similar in appearance to stained glass. “Aomadara tamamushi,” a type of jewel beetle about 2 cm in length that lives on dead trees, looks as if gold powder is sprinkled over its turquoise body.

Hara often shoots more than 1,000 photos of the same bug because he sometimes overlays at least 100 to create a single image. The photographer is also selective about the angles and lighting to make his subjects look appealing.

His perfectionism is a big leap from when he first picked up a camera 10 years back after being inspired to do so by one of the “danka” parishioners at the temple where he was working who support temples financially.

He started out armed with a single-lens reflex camera he had bought but it was hard for him to travel far away to take pictures because he had no fixed days off.

Over time he improved his skills on his own, using overseas photography websites as references.

One of the techniques he now likes to employ is focus stacking, which combines several photos taken with a microscope at different focus points into a single image with an extended depth of field.

“(In Buddhism,) there is a statement that says, “Tat tvam asi,’ reflecting a worldview that sees the self and the universe as one,” Hara said.

“By meditation, you will find your existence dissolve into nature, realize a universe inside you and experience a sensation to become one with it. When I hold my breath and concentrate on a 1-millimeter insect, it recreates a sensation similar to meditation. And I find a universe in the tiny bug.”

After working at temples in Himeji and Kobe in the prefecture, Hara became the chief priest of Kanakurasan Konzoji temple here in October last year.

“I want to let people who aren't particularly fond of insects and children to know how fantastic the bugs that are all around us are,” he added.

Hara, in a blog post, expressed his fears that insect populations in areas encroached upon by humans are declining and lamented the disappearance of one species he used to find on a neighborhood tree.

After the tree was cut down, he never chanced upon the same bugs elsewhere.

He found he wasn't alone in his concern over seeing dwindling insects last year when a reader wrote back to comment on the issue.

But the agency said in November 2020 that it decided to stop monitoring the creatures because it had become increasingly difficult to spot them around its nationwide observatories due to urban sprawl and climate change.