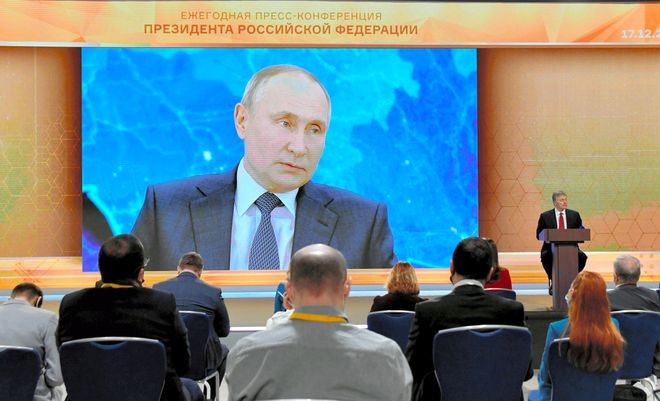 The United States and Russia should take the inauguration of President Joe Biden on Jan. 20 as a cue to explore a new bilateral relationship that will improve their handling of nuclear disarmament and other issues.

New START (Strategic Arms Reduction Treaty), their only remaining nuclear disarmament treaty, is due to expire in February. Negotiations for its extension have remained stalled since last year.

Biden claimed his presidential election victory in November, but Putin did not congratulate him until Dec. 15, more than a month later. The delay stood out among major world leaders.

At a news conference on the same day, Putin expressed his fear of the United States interfering in Russian elections, and called on his nation to unite and resist.

But Biden also criticized Putin during his presidential election campaign. Harkening back to 2011, when he was the U.S. vice president, Biden recalled telling Putin in Moscow, “I’m looking into your eyes, and I don’t think you have a soul.”

Biden has indicated his intention to rebuild alliances with the North Atlantic Treaty Organization and other nations during his presidency. He is also expected to demand that Russia address its human rights issues.

Both moves are bound to be met with stiff resistance from Russia.

Putin has invaded neighboring territories in recent years and is ruling his country with an iron fist. This is reason enough for the United States to play hardball with Russia on matters related to human rights and the rule of law.

However, the two nations together possess more than 90 percent of the global arsenal of nuclear warheads, wielding tremendous influence over various parts of the world. Should all dialogue or collaboration cease between these two nuclear superpowers, they will be incapable of fulfilling their responsibility of protecting global peace and security.

For this reason, the demise of New START must be avoided at all costs. As soon as the Biden administration is sworn in, Washington and Moscow must do everything in their power to forge an agreement on extending the treaty.

Also urgent is the need to revive the Iran nuclear deal, abandoned arbitrarily by the Donald Trump administration. Other pressing issues on which U.S.-Russia collaboration is indispensable include the North Korean nuclear problem and China’s surging military presence.

We probably cannot expect any immediate improvement in the Biden-Putin personal relationship. But it may be worth the effort to explore issue-by-issue solutions within multinational frameworks.

Precedents that can be consulted include the participation of Germany and the five permanent members of the United Nations Security Council in the Iran nuclear deal, and the six-party talks on North Korean problems.

We believe now is the time for not only the United States and Russia, but also many countries, including Japan, to reaffirm the value of multinational cooperation.

Every country must face, and act on, the fact that the “my country first” mentality provides no solution to issues such as nuclear proliferation, infections and the environment.