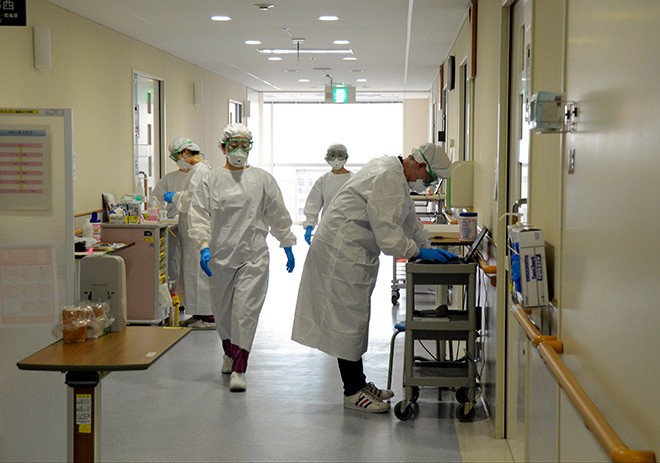 Medical staff of the Self-Defense Forces work in a COVID-19 section of the SDF Central Hospital in Tokyo on Dec. 11. (Asahi Shimbun file photo)

The number of new COVID-19 cases in Japan topped 5,000 for the first time on Jan. 6, including a record-breaking 1,591 confirmed infections in Tokyo.

Aichi Prefecture’s record number of 364 new COVID-19 cases on Jan. 6 prompted Governor Hideaki Omura to consider asking the government to issue a state of emergency for his central Japan prefecture.

A record high was also set in Hyogo Prefecture, which reported 248 new infections, the second straight day the count has exceeded 200.

The figure for Tokyo was particularly troubling for its health care system because it came day after the number of inpatients with the disease in the capital topped 3,000 for the first time.

As of Jan. 5, the number of COVID-19 inpatients was a record-high 3,025, with the occupancy rate of hospital beds hitting 86 percent.

There were also 870 COVID-19 patients recuperating at accommodation facilities and 4,480 recovering at home, bringing the total to 8,375 patients in Tokyo.

The number of patients listed in serious condition in the capital rose by two from the previous day to a record 113 on Jan. 6, metropolitan government officials said. The figure exceeded 105 set in late April last year under the first state of emergency.

A second state of emergency is expected to be declared this week for Tokyo and three surrounding prefectures.

The situation in the capital is now worse than what it was under the first state of emergency.

The Tokyo metropolitan government in December said it will increase the number of hospital beds for COVID-19 patients from 3,000 to 4,000. It currently has 3,500 beds, and nearly half of the 220 beds for patients with serious symptoms are occupied.

“It is an extremely critical situation,” Tokyo Governor Yuriko Koike said at a news conference on Jan. 4.

Health care workers are growing frustrated over the dire situation.

“Medical personnel are exhausted and worn out as they have continued to treat patients from the first wave,” Haruo Ozaki, head of the Tokyo Medical Association, said. “Reducing the number of new patients is the only way to get through this crisis, and we fear the medical capacity is strained to near the breaking point.”

At the peak of the first wave of virus infections, the total number of COVID-19 inpatients and patients at accommodation facilities and their homes in Tokyo was 2,974 as of May 6.

But now, the number of inpatients alone has exceeded that mark.