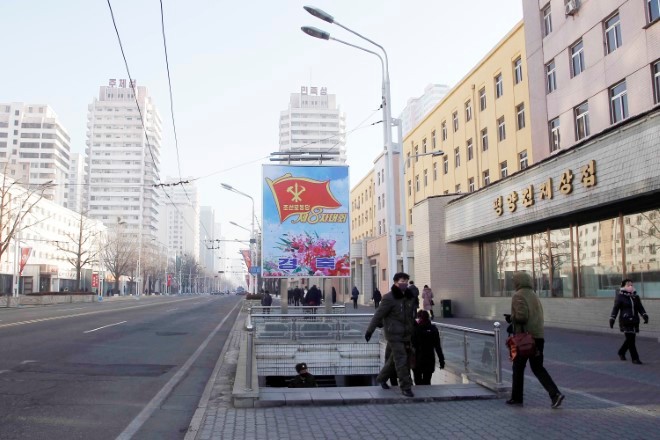 People walk past a billboard announcing the 8th Congress of the Workers’ Party along a main street of the Central District in Pyongyang, North Korea, on Jan. 6. (AP Photo)

SEOUL--Already suffering under stringent U.S. and U.N. sanctions, North Korea’s economy faced a double whammy of severe floods and the coronavirus pandemic this year, which prompted Pyongyang to shut its border with China and ditch outside aid.

How bad is North Korea’s economy? Here is what we know.

After shrinking 4.1 percent in 2018--its sharpest contraction in 21 years--North Korea’s economy grew 0.4 percent in 2019, thanks to improved weather and crop yields, according to South Korea’s central bank.

But the isolated economy may have contracted by 8.5 percent last year, Fitch Solutions said, while South Korea’s Hana Institute of Finance estimated a decline of up to 10 percent.

The biggest blow came from a drop in trade with China, its top ally which is responsible for some 90 percent of North Korea trade. Two-way trade plunged nearly 80 percent to $534.1 million last year as of November from the same period of 2019, Chinese customs data showed.

The pandemic likely had a greater impact than international sanctions, severing nearly all sources of foreign currency, including tourism, labor exports and overseas restaurants, experts say.

Reduced trade also led to a lack of fertilizer and farming tools, and North Korea’s chronic food shortages were exacerbated by severe floods.

There was more rain last summer than 2007 when North Korea suffered devastating floods, according to Seoul’s Unification Ministry. North Korean state media reported tens of thousands of homes and vast swaths of farming areas were damaged, mostly in the breadbasket province of Hwanghae.

The U.N.’s World Food Program said in July, just before the monsoon season, that more than 10 million people, or 40 percent of the population, were already facing food shortages.

“A crisis could come in the spring due to a fall in outside aid and fertiliser imports as well as flood damage, which came together to inevitably cut crop harvest,” said Jang Hye-won, an analyst at the Hana Institute of Finance, in a Dec. 18 North Korean economy outlook.

Economic concerns triggered volatility in fuel and food prices and exchange rates in unofficial markets, where most ordinary North Koreans buy their food.

In the capital Pyongyang, the value of the North Korean won rose about 17.5 percent and 15.2 percent against the dollar and Chinese yuan between September and November, according to data compiled by Daily NK, a Seoul-based website that gathers news and information from sources inside North Korea.

Rice and gasoline prices, which are sold in local currency, plummeted more than 10 percent during that period in line with the appreciation of the won.

“The exchange rates likely increased because there were less foreign currencies available after trade and smuggling with China was cut and North Korea sealed off some areas where any suspected COVID-19 cases came out,” said Kang Mi-jin, a defector and economist who analyses market data at Daily NK.

Hokkaido's 'Shiroi Koibito' cookies to be sold in China, U.S.