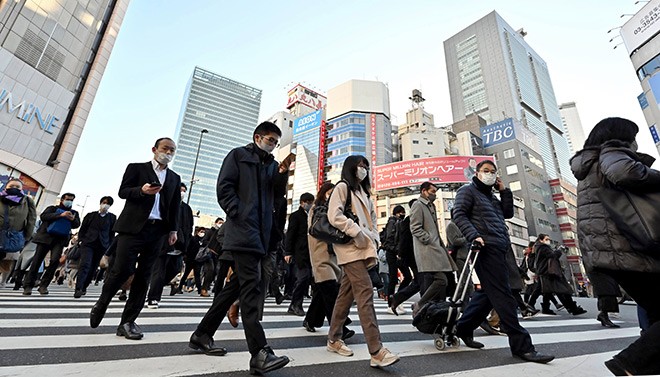 Commuters in front of Shinjuku Station head to work on Jan. 8, the day after a new state of emergency over the COVID-19 pandemic was declared for Tokyo and three neighboring prefectures. (Hiroyuki Yamamoto)

Suga, declaring a state of emergency on Jan. 7 for Tokyo and three neighboring prefectures, asked that up to 70 percent of company employees work from home until Feb. 7, when the emergency is set to expire.

But the morning commute on Jan. 8 in the capital showed scant signs of any change from the day before.

The area around Musashi-Kosugi Station in Kawasaki’s Nakahara Ward is marked by a number of high-rise condominiums from where residents utilize the many lines that pass through the station, including the JR Yokosuka Line and the Tokyu-Toyoko Line.

“There's no change at all," said a 34-year-old company employee who was going to Yokohama Station. "It feels like there are more passengers this week with the resumption of school.”

His company emailed staff the previous evening instructing them to work from home from next week.

“I can work from home because I do clerical work, but it will be difficult for those in sales,” the man said. “I don’t think there will be a major change in train ridership.”

There was also no visible change from a typical workday in the number of commuters who flooded out of trains at the Tokyo Metro Toranomon Station at about 8 a.m.

“Even with the state of emergency declaration, there was no change in how crowded the subway was,” said a 27-year-old employee who works in the Kasumigaseki Building.

He said his company had taken a number of measures against the virus, including using alcohol disinfectant and asking employees to refrain from speaking with one another.

“But I'm worried because I can't avoid using the train for my commute,” he said.

“I feel like the congestion is getting worse by the day, likely because more people are returning to work after the New Year holiday period,” a security guard at a nearby hotel said.

The hotel where he works has been designated as an accommodation for COVID-19 patients with minor symptoms.

“But we have had to turn away some people because all the rooms are taken,” he said. “All the facilities in Tokyo will be overflowing with more than 1,000 new cases every day.”

The iconic scramble crossing in front of Shibuya Station was also bustling as usual on Jan. 8.

A man in his 70s who serves as an executive for a company with 10 or so employees said, “I cannot discuss possible business deals or do all paperwork at home. It will be difficult for small enterprises like ours to decide to begin working from home at once.”

He added that the JR Yamanote Line that he uses for his commute was packed as usual.

Some company employees, however, were using office-sharing facilities to avoid having to commute to their companies.

A line of customers was already waiting outside to enter the Tokyo Telework Model Office in Fuchu, western Tokyo, when it opened its doors on Jan. 8.

Though the facility can handle about 60 users, it restricted its capacity to about 40 to prevent a spread of COVID-19 infections.

The Tokyo metropolitan government has been operating the facility since summer 2020, which has proved popular since it is free to use.

Yoichi Yoshida, 44, used it for the first time on Jan. 8, the first day he could get a reservation even though he had wanted to use the facility earlier.

He works for a company affiliated with Tokyo Metro Co. and while his commute would normally be about an hour, it was a three-minute walk from his home to the office-sharing facility.

WOOC Co. operates office-sharing facilities around the nation. In December, membership was up by about 1.5-fold over December 2019. A company official said the novel coronavirus pandemic was a major factor.

A 40-year-old computer system engineer who works in Tokyo uses it five days a week, which is just a two-minute walk from his residence.

“I get worried about being in crowds when the number of infections increases,” he said. “It's better not to commute.”