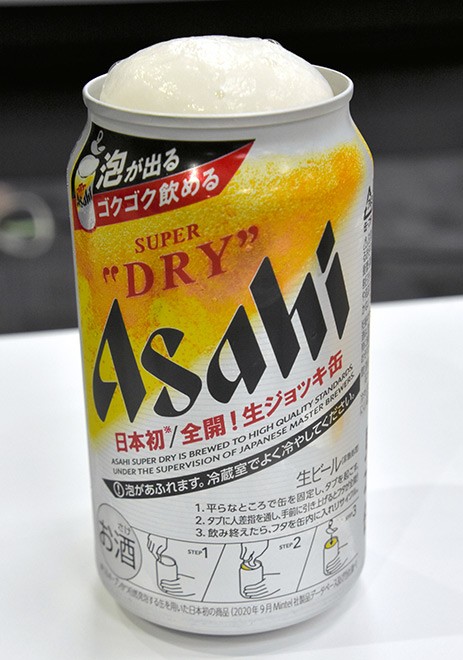 A new draft beer version of the Asahi Super Dry line will go on sale in April. (Takumi Wakai)

Asahi Breweries Ltd. will debut a new draft beer version of its Super Dry line in April to quench the demand from more people drinking at home instead of at bars during the COVID-19 pandemic.

The major beverage maker announced the news on Jan. 6.

A special feature of the new Super Dry draft is its can design, which lets drinkers tear off the entire top of the can to drink the beer, making it more similar to drinking a regular draft in a pub.

The inner side of the lid is also specially designed with tiny bumps that act to create more head on the beer, also adding to its similarity to an authentic draft.

The beer's ingredients are the same as that of a normal Super Dry. But Asahi Breweries boasted that drinkers can enjoy the scent and satisfying quality close to draft beers served at restaurants and bars.

While sales of Super Dry for bars and eateries fell by 40 percent year on year in 2020, Asahi saw a 2 percent rise in sales of canned beer to households.

The company will start selling the new draft beer at convenience stores nationwide from April 6 and at other retail shops from April 20.