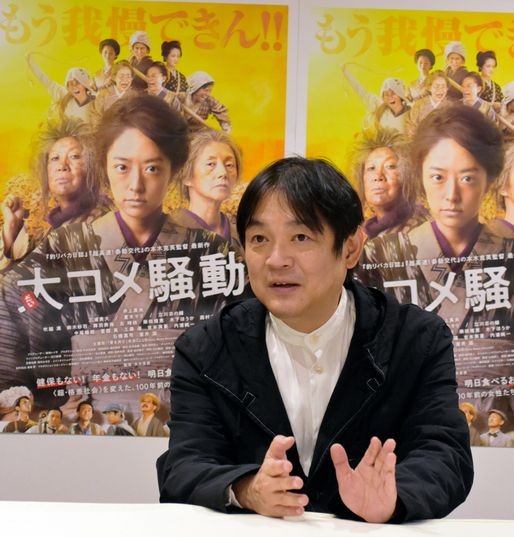 "Dai-Kome Sodo" (The great rice riot), a film that began screening at theaters around the nation on Jan. 8, is interspersed with ditties with curious melodies at turning points in the narrative.

Born in the Kanagawa Prefecture town of present-day Oiso, Soeda satirized politics and society at the height of the "Jiyu Minken Undo" (movement for civic rights and freedom) of the 1880s, endearing himself to the frustrated and discontented masses.

"I never have money. You have no money, either," goes one of his ditties. "What brought you to this life? To pay taxes and interest."

"Soeda gave expression to the simple sentiment of the common folk who were sick and tired of the national policies of universal conscription and industrial development," noted Mamoru Hosoi, 63, an expert on the local history of Oiso.

Soeda was said to have resided in the slums for many years, and chose the life of a vagabond in old age.

The film depicts the historical Rice Riot of 1918, which erupted in Toyama Prefecture, from the viewpoint of local women.

Ordinary homemakers in fishing villages rose up and changed society. And Soeda's lyrics vividly captured the zeitgeist of the time, empathizing with society's anonymous and vulnerable members.

And they definitely resonate with us today.

For instance, Soeda's critical spirit rings out especially loud and clear in this song he penned in 1930: "Americanism has taken deep root/ Prices of goods keep soaring/ Human life keeps getting cheaper/ Ah. bummer/ All is amiss on the daily life front."

Don't tell me this isn't a Reiwa Era song.