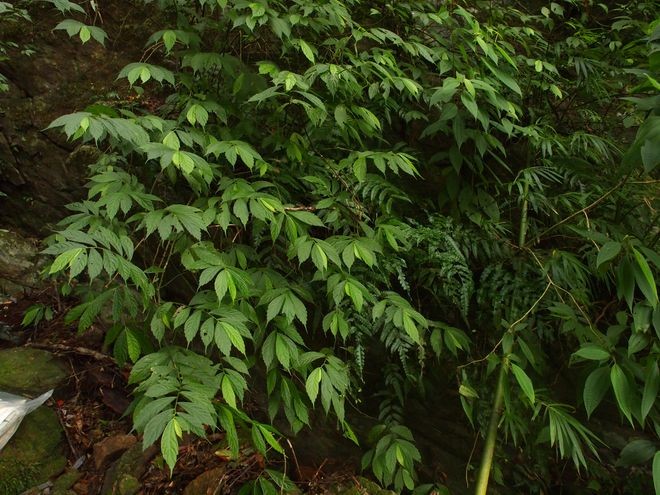 The Elatostema lineolatum plant, seen here on Amami-Oshima island, Kagoshima Prefecture, is the first to be spotted in Japan in about a century. (Provided by Shuichiro Tagane)

KAGOSHIMA--A dwarf shrub species of the nettle family, believed extinct in Japan for about a century, was recently found to be thriving in the wild on Amami-Oshima island, part of southern Japan's Kagoshima Prefecture.

Shuichiro Tagane, a specially appointed assistant professor of plant taxonomy with the Kagoshima University Museum, said the last report of Elatostema lineolatum growing wild in Amami-Oshima island was in 1924 and Okinawa Prefecture in 1887.

The discovery was published in the Nov. 3 online edition of Nature of Kagoshima, a Japanese-language bulletin of the Kagoshima Prefecture association for the conservation of natural environments.

The article describes Elatostema lineolatum as a subshrub species that grows to a height of between 50 centimeters and 2 meters and is characterized by leaves whose edges in the upper half are saw-toothed.

The plant is distributed over broad geographical areas, including Nepal, India, China and Taiwan. It is one of 28 plant species classified as extinct in a red list issued by the Environment Ministry.

Tagane and his team were studying the growth of plants in Amami-Oshima on Oct. 24 when they came across a colony of an unfamiliar plant species along a ravine in an evergreen forest about 30 meters above sea level.

The plants, some 1.5 meters tall, were growing close together on a plot measuring about 2.5 meters on each side.

Team members took cuttings to study in a lab and later confirmed the existence of Elatostema lineolatum.

“Amami-Oshima is an area that hosts diverse and precious plant species growing in the wild,” Tagane said. “More rare plant species could still be found on the island in years to come.”

Tagane now plans to undertake another field study that will include the site of the latest discovery and its surroundings before the current fiscal year ends in March to look for more Elatostema lineolatum colonies on Amami-Oshima island.