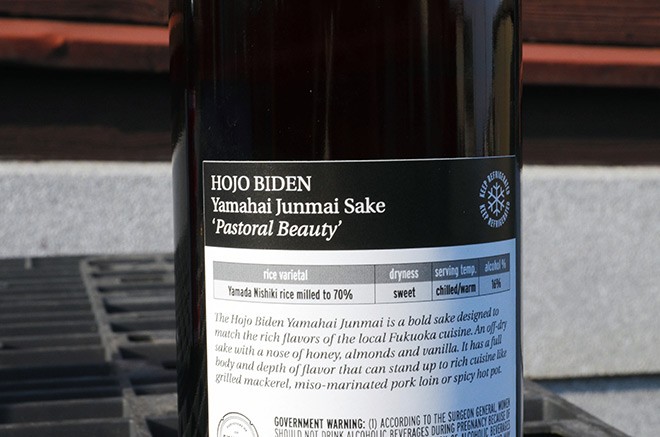 TACHIARAI, Fukuoka Prefecture--When demand suddenly started pouring in for a sake mostly popular with connoisseurs, Tadatsugu Inoue at the Mii no Kotobuki brewery here was baffled.

But the chief sake brewer soon realized why: the alcoholic beverage is called “Hojo Biden.”

“We have always had good fortune,” Inoue said of the coincidental, but timely association with President-elect Joe Biden.

The second time is the charm for the century-old sake brewer, which has struggled to buck a downturn in sales last year following the coronavirus pandemic.

Takehiko Inoue, creator of the globally popular "Slam Dunk," loved the sake produced by Mii no Kotobuki so much that he named one of the characters in the manga after the brewery name.

The brewery, founded in 1922 here, introduced Hojo Biden in 1996, many years before Joe Biden, a longtime U.S. senator, emerged as a household name in Japan.

The rice wine has a pronounced flavor and was prized by sake fans in Japan while also building a following overseas.

But there had been no signs that the drink would see a huge spurt in sales in the summer of 2020.

The brewery shipped 120 bottles of the brand to the U.S. market in December 2019 through a trading company in Tokyo. No additional orders came in for the following six months.

But things changed after Biden became the Democratic presidential nominee in August.

All 360 bottles of Hojo Biden that Mii no Kotobuki shipped in August sold out quickly. Two months later, the Tokyo trader asked the brewery for more of the brand. It said the beverage began selling briskly in New York.

Before Joe Biden emerged into the spotlight, the brewery has been famous among fans of “Slam Dunk,” published from 1990 to 1996, as the maker of the sake that Inoue loved. The artist revealed in a publication in 2008 that the name of a teammate of the protagonist in the manga was inspired by it.

After the creator’s acknowledgment, the brewery made a new sake brand dedicated to the character to cash in on its association, featuring the character’s uniform number and red, his team’s color, in its label. Mii no Kotobuki +14 proved an intoxicating hit not only in Japan, but also in China, Taiwan, Hong Kong and elsewhere.

The brewer Inoue, who is also the managing director of Mii no Kotobuki, said it produces sake in the hopes of reaching an audience that has rarely tasted rice wine.

“We are committed to making high-quality sake, both in taste and label,” he said.