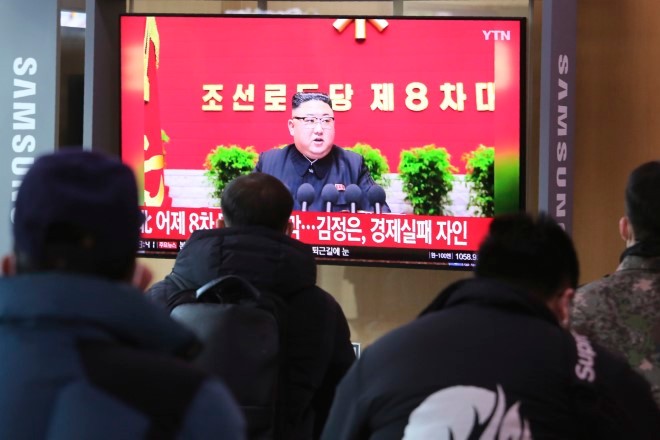 SEOUL--Kim Jong Un's ambitious new plan for the next five years is aimed at developing North Korea's shattered economy, but the proposals may falter in the face of major crises that have already stalled the young leader's current projects.

In remarks released this weekend, Kim blamed international sanctions as well as unanticipated crises including the coronavirus pandemic and natural disasters, for preventing the government from improving people's lives, while criticising officials for mistakes that needed to be fixed.

However, the new plan is unlikely to turn around the growing decay of the North Korean economy, making it difficult for Kim to deliver on his lofty promises and potentially cutting the resources available for treasured military projects, said Chad O'Carroll, CEO of Korea Risk Group, which monitors North Korea.

"(There is) no apparent interest in reform, sanctions relief, or an opening of the economy," he said in a post on Twitter.

Since Kim came to power in 2011, standards of living improved for many North Koreans as markets proliferated and consumer goods became more widely available. But now the country is facing the most challenging situation since a famine in the 1990s, and projects such as tourist resorts, economic zones, and a large hospital appear stalled.

Kim's decision to stage a huge congress and talk of ambitious projects in the face serious shortages for many North Koreans shows how the government has "internalised its own propaganda," said Leif-Eric Easley, a professor at Ewha University in Seoul.

"The country's economic and social conditions are worse than many outsiders appreciate," he said. "Kim tells his people about domestic shortfalls and promises improvements but is unlikely to adjust policies to receive aid and assistance."

The plan - which includes proposals for more advanced nuclear weapons - appears to be doubling down on North Korea's "Byungjin," or parallel development policy, said Kang Dong-wan, professor of Political Science & Diplomacy at Donga University in Busan.

"North Korea is going back to its 2017 plan – dual policy of improving its nuclear deterrent and self-reliant economy," he said.

North Korea plans to invest in tidal and nuclear electricity plants as well as "zero-carbon buildings and zero-energy buildings in keeping with the world trends of architectural development", while the country's mobile communication networks should become "next-generation" as soon as possible.

At least 50,000 apartments are to be built in the capital of Pyongyang, and another 25,000 dwellings in the Komdok area, which is home to major mining operations.

Kim called for the capacity to produce 8 million tons of cement to support the large building projects.

Improving the economy can't depend solely on solving outside problems and will only be possible after "breaking with current wrong ideological viewpoint, irresponsible working attitude, incompetence and obsolete working manner," Kim said.

North Korea's economy shifted away from being fully centralised after many private markets and business sprung up in the face of government failures to provide in the 1990s.

Analysts say those markets are here to stay, but there are signs the government is reasserting itself in ways that effectively roll back or curtail at least some of those reforms.

"The important tasks... is to restore the state's leading role and control in the overall commerce service activities and preserve the nature of socialist commerce serving the people," Kim said.