EDITORIAL: Mass arrests in Hong Kong yet again ignore the popular will 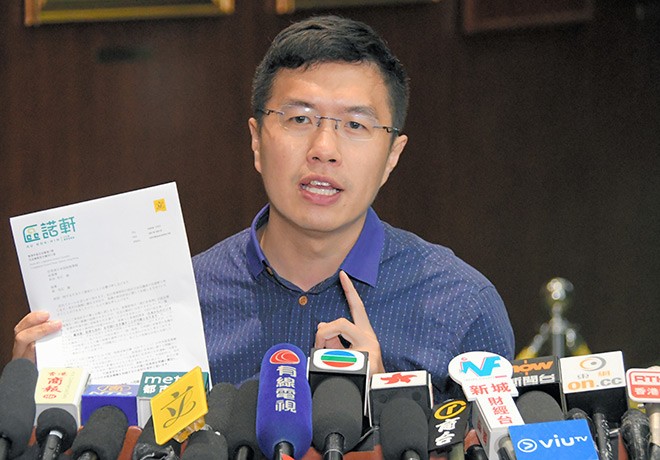 Au Nok-hin, a 33-year-old student in a doctoral program at the University of Tokyo’s graduate school, flew to Hong Kong late Jan. 5 for a temporary visit home.

He arrived at a hotel early Jan. 6 to temporarily quarantine himself as a precaution against novel coronavirus infection. About two hours later, he was arrested by a special team of the Hong Kong police. He had barely had time to rest.

Au, a former member of Hong Kong’s Legislative Council, was arrested on suspicion of violating the national security law over his actions and remarks concerning elections last July to select pro-democracy candidates for a Legislative Council election.

The Law on Safeguarding National Security in the Hong Kong Special Administrative Region was enacted one-sidedly by Beijing to crack down on anti-establishment movements in Hong Kong.

Au was among 53 pro-democracy figures arrested that day. They included senior members of political parties, a scholar and a lawyer.

The roundup was a blatant move to silence pro-democracy forces. Hong Kong police have begun using the national security law, which is meant to deprive the city of its freedom and autonomy, as a weapon of oppression.

At the time of the primary elections, the pro-democracy parties set a goal of winning a majority of Legislative Council seats, voting down a budget proposal and exerting pressure on Chief Executive Carrie Lam to step down.

The authorities contended that amounted to a “plan to paralyze” the Hong Kong government. As such, they deemed it punishable as an attempt to subvert state power.

Criminalizing the mere act of advancing a parliamentary strategy, which is authorized under Hong Kong’s Basic Law, is unreasonable in the extreme.

Despite pressure from the authorities, some 610,000 people, more than three times the goal of the organizers, came forward to vote in the elections. The governments of China and Hong Kong should have respected that popular will.

But they did exactly the opposite.

These extraordinarily relentless acts of intimidation and repression apparently stemmed from the landslide victory of the pro-democracy camp in Hong Kong’s district council elections of 2019.

The victory disproved the argument of China’s Communist Party government that pro-democracy protests in Hong Kong are at odds with the city’s public sentiment.

The Legislative Council election is scheduled to be held this September. Members of an Election Committee will be selected at the end of this year for an election to pick the chief executive next year.

The systems for both elections overwhelmingly favor the pro-Beijing forces. However, it appears that the authorities are never at ease until they have the pro-democracy camp completely under their thumb.

Among those arrested en masse was a lawyer with U.S. citizenship, which clearly shows that this problem does not only concern people in Hong Kong and China.

“I want Japanese to take a look at Hong Kong and reflect on whether the sort of freedom that they take for granted can be taken for granted,” said one pro-democracy Hong Konger in Japan.

That earnest call should be taken squarely to heart.

One of 22 workers trapped in China gold mine rescued