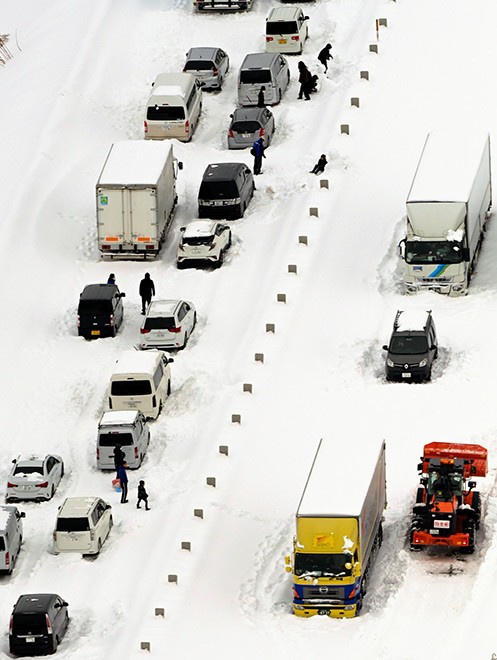 Vehicles are stuck in heavy snow on the Hokuriku Expressway in near Sakai, Fukui Prefecture, at 1:17 p.m. on Jan. 10. (Takayuki Kakuno)

At least 13 people died and 249 were injured in the heavy snowfalls that blanketed large swaths along the Sea of Japan coast between Jan. 7 and Jan. 11, the Fire and Disaster Management Agency said Jan. 11.

Three people in their 60s through 80s died in Fukui Prefecture on Jan. 9 or 10, prefectural officials said.

Forty-seven people in the prefecture were injured mainly by tripping or falling from roofs during snow removal, the officials added. Five of them were hospitalized after becoming sick while trapped in their cars in the heavy snow.

The three prefectures have asked the Self-Defense Forces for assistance in the rescue efforts.

The Meteorological Agency said more than 10 monitoring spots in the region along the Sea of Japan set snowfall records for 72 hours until late night on Jan. 10 during the current cold wave.

Among them was Joetsu, Niigata Prefecture, where up to 187 centimeters of snow fell, according to the agency. In many parts of the city, the accumulation of snow exceeded 3 meters.

Wajima in Ishikawa Prefecture, Himi in Toyama Prefecture and Sakaiminato in Tottori Prefecture each reported snowfalls of more than seven times that of the same period of an average year.

The massive amount of snow was brought to the Hokuriku region and elsewhere after a snow cloud formed through a collision of winds blowing in different directions over the Sea of Japan. The snow cloud kept drifting to specific areas in the shape of a belt.