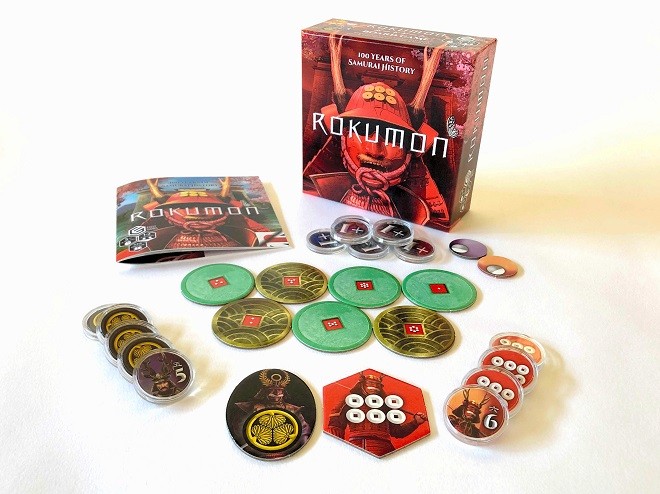 Released in autumn last year, “Rokumon” was designed by Charles Ward, 41, who has been living here since 2004.

The head-to-head board game features six acts, including the battle for Ueda Castle, when the Sanada clan defeated the Tokugawa forces with a much smaller army, and the winter and summer campaigns of the Sieges of Osaka.

Born in London, Ward lived in Spain between the ages 5 and 12. He studied photography and other subjects at college and held photo and art exhibitions.

Impressed by war-renouncing Article 9 of the Japanese Constitution that he came across on the internet, Ward decided to visit Japan and found an English-teaching job in Matsumoto.

Eager to learn more about Japan and improve his language skills, Ward traveled across the country on a bicycle for a year starting in 2006. Along the way, he did farm work in exchange for meals and accommodation and slept outside in a tent.

He compiled his travel experiences into a book titled “Charlie desu, Chikyujin desu” (I’m Charlie, I’m an Earthling), which was published in 2008.

Ward mainly teaches English to children. He became fascinated by board games when he used them in a role-playing teaching method, and decided to make his own.

“Rokumon,” Ward’s fourth title, is for one to two players aged 8 and up. Each player uses a set of four red pieces (Sanada) or a set of five black pieces (Tokugawa) on coin-shaped tiles modeled after the Sanada “Rokumonsen” crest representing six coins.

The battle is won when three pieces of the same color are placed in a row or stacked on a tile. The Sanada clan always makes the first move because it starts at a one-piece disadvantage. Each act ends in five to 10 minutes.

The game is played through the acts, and each tile is claimed depending on the strength factors of legendary warriors, such as Sanada Yukimura, his father, Masayuki, Tokugawa Ieyasu, Honda Tadakatsu and Date Masamune.

“It can attract interest from everyone because they are local heroes, and it is simple and easy to play. It’s the best game I have ever designed,” Ward said in fluent Japanese.

Made from cardboard, the board game set can be carried in a small box. Explanatory texts, which also contain historical backgrounds of the warriors, are available in Japanese and English. A Spanish version will soon be ready.