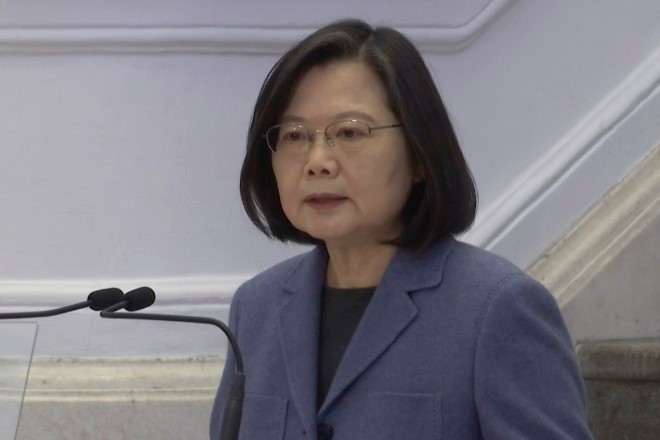 In this image from video, Taiwanese President Tsai Ing-wen delivers a speech at the Office of the President in Taipei on Jan. 1. (AP Photo)

TAIPEI--The U.S. ambassador in the Netherlands has hosted Taiwan's representative to the country at the U.S. embassy, in the first publicly announced visit to a U.S. government office since the secretary of state lifted restrictions on interactions.

U.S. Secretary of State Mike Pompeo announced the change on Saturday, which scraps curbs on meetings with Taiwan officials, in the waning days of the Republican Trump administration before Democrat Joe Biden assumes the presidency on Jan. 20.

China condemned the move, saying nobody could prevent China's “reunification.” Beijing views the democratic island as its own territory, with no right to state-to-state ties.

The U.S. ambassador to the Netherlands, Pete Hoekstra, said on Twitter that Taiwan's representative to the country, Chen Hsing-hsing, had met with him at the embassy on Monday.

“Made some history today: Welcomed Taiwan Representative Chen to our Embassy,” he wrote, including pictures of the two of them in the embassy building.

“Glad that our @StateDept colleagues around the world will now be able to host our friends from this vibrant democracy on our Embassy grounds.”

Chen tweeted she was extremely pleased and honored to visit the embassy, saying it was “the very first time in my diplomatic career.”

The United States, like most countries, has no formal diplomatic ties with Taiwan, and previous interactions between officials from both sides were limited to non-official venues such as hotels.

China has been angered by stepped-up U.S. support for Taiwan under the Trump administration, including arms sales and visits to Taipei by senior U.S. officials.

The U.S. ambassador to the United Nations, Kelly Craft, is due to arrive in Taiwan on Wednesday for a three-day visit, which has also angered Beijing.