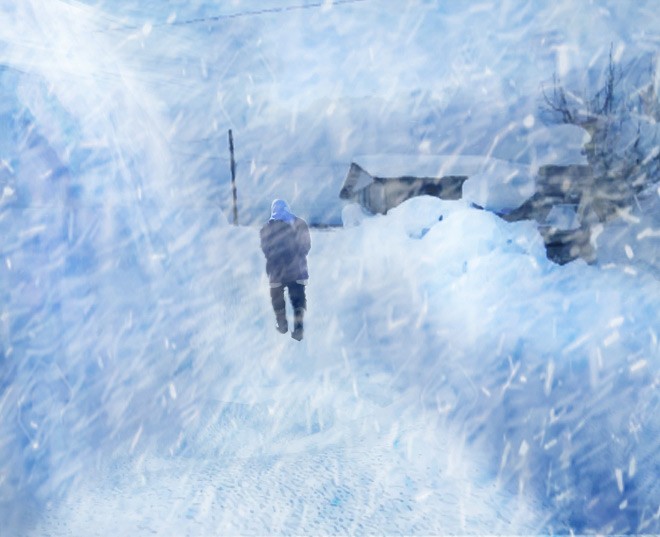 wintry afternoon
words coming out of my mouth--
even they are white
--Samo Kreutz (Ljubljana, Slovenia)

Eighty-seven
we listen to the old voice
of the wind
--Ramona Linke (Beesenstedt, Germany)

The haikuist marked her mother’s 87th birthday. The eldest in his neighborhood, Satoru Kanematsu received many greetings at the New Year when he walked up a hill to see the sunrise at a lookout called Fine-View Heights.

Homeowners in Junko Saeki’s neighborhood in Tokyo have aged well into their 80s and 90s. At the end of her street, company employees rent lodging—about 10 families in all. The haikuist reports that “when it snows, their children come out and shovel all the snow. We are really grateful to these folks.”

kids shovel the snow
for the aging neighborhood
company housing

frozen silence--
i can hear
the snowman growing

last night
that distant chill again
is that you?

Sally A. Fox struck a match in the San Francisco Bay area. Wool sweaters and scarves were worn inside Kanematsu’s home.

Kath Abela Wilson keeps the clothes of a beloved writer as memorabilia in a closet at home in Pasadena, California.

autumn winds…
the swirling circles
of my hormones

changes--
how to hide from the wind
blowing everywhere?

Partha Sarkar paused for a moment of silence for trees felled in India. Lakshmi Iyer and her neighbors grow their own vegetables in Kerala, India, remarking how it is necessary “for a living, in this pandemic.” Robin Rich prepares to cook in Brighton, U.K.

dirt under my nails
wash my hands after
buying vegetables

Randall Herman shared this haiku from Victoria, Texas, where tradition holds that if you eat simply on New Year’s Day, good luck will come to stay for the entire year.

black-eyed peas--
with pruning shears at
the well-bucket

Prepared with fresh seaweed, Ken Sawitri heaped succulent “urap latoh” onto warm rice in the Indonesian seaside town of Rembang. Sue Colpitts prefers to pour a little fresh milk into her tea but said that it’s hard to get to the local grocer in Peterborough , Ontario. Hifsa Ashraf savored freshly baked flatbread in Rawalpindi, Pakistan.

into the barcode
the green caviar
loses its shape

snowbound
I drink my tea
Black

early spring…
the aroma of roti
from a clay oven

Nani Mariani made a video call from Melbourne, Australia. Isabella Kramer tried in vain to keep her pets calm in Nienhagen, Germany.

Blizzard
the uncertain outcome
of a cat and an aquarium

Angela Giordano dared to hold on to festive traditions in Italy.

under the mistletoe
a kiss with relatives--
a new year

Mark Gilbert compares reactions to the current pandemic he’s experiencing in Nottingham, U.K., to the “Spanish Flu which coincided with the end of the first World War, when so much of our modern healthcare system had yet to be developed and vaccines were not available.”

in the trenches
a vaccination
against despair

Tempted to curl up with his cat behind the stove or on top of the duvet, Pitt Buerken nonetheless headed out early to work as usual in Munster, Germany. Kanematsu noticed the lights were still on at the neighborhood “juku,” a privately run school that offers supplementary classes to students preparing for university entrance exams.

The next issue of the Asahi Haikuist Network appears Jan. 29. Readers are invited to send haiku about evergreens on a postcard to David McMurray at the International University of Kagoshima, Sakanoue 8-34-1, Kagoshima, 891-0197, Japan, or by e-mail to (mcmurray@fka.att.ne.jp).