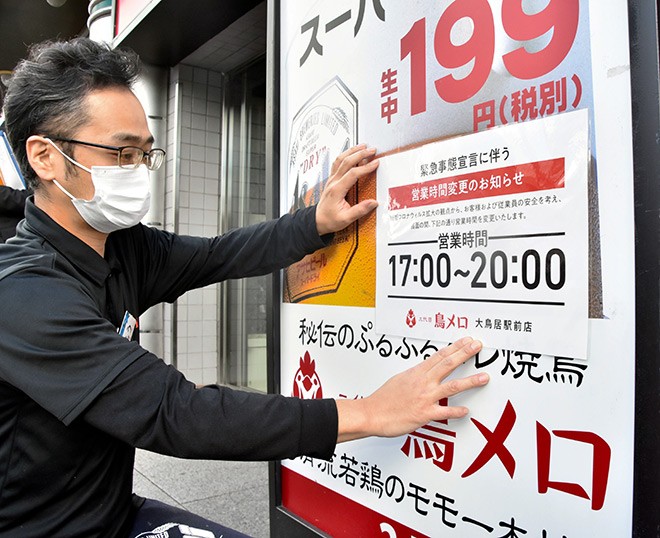 The manager of an "izakaya" Japanese-style pub in Tokyo's Ota Ward posts a sign saying the establishment will close at 8 p.m. under the state of emergency for the novel coronavirus pandemic. (Takumi Wakai)

Proposed legal changes would give governors the power to fine bars and restaurants that refuse to shorten their business hours during the pandemic and could allow authorities to penalize uncooperative COVID-19 patients.

The government submitted possible changes concerning two laws to ruling coalition lawmakers on Jan. 12. The legislation is expected to be deliberated early in the ordinary Diet session scheduled to convene on Jan. 18.

The recommended revision of the special measures law to deal with the novel coronavirus pandemic includes new “preventive measures” against the spread of infections.

These measures are intended for situations in which potentially virus-spreading business and social activities have continued, making it difficult for the government to prevent the issuing of a state of emergency for the affected areas.

The prime minister as head of the government task force dealing with the COVID-19 health crisis would designate the period and prefectures for which the preventive measures are needed.

Governors have asked bars and restaurants to shorten their business hours or to temporarily shut down to halt the spread of the virus. But the current special measures law contains no penalties for businesses that reject such requests.

Under the revised law, governors in the designated areas would not only be able to order bars and restaurants to close earlier but can also fine establishments that have no good reason for refusing to cooperate.

Prefectural government officials would be allowed to conduct on-site inspections as well as ask for reports from the establishments to see if they are continuing to ignore the requests.

If a governor refuses to implement the appropriate preventive measures, the prime minister can instruct that local leader to do so.

Opposition lawmakers had criticized the introduction of fines and other penalties against noncompliant businesses. Further debate will center on the size of the fines.

The opposition had also asked that support measures for businesses be clearly included in the proposed legislation as a precondition for imposing fines. However, the bill now only contains vague wording of “making efforts to implement support for businesses.”

Another proposed change presented at the Jan. 12 meeting involved the classification of the novel coronavirus under the Infectious Diseases Prevention Law.

The law currently lists the novel coronavirus as a “designated infectious disease,” which allows for a more flexible approach depending on the characteristics of the virus and the disease it causes.

But such a classification is valid for only two years. The government proposed classifying it as a “novel influenza infection” after the two-year period ends.

The Infectious Diseases Law has a five-class system depending on the danger level of the disease. Ebola fever and other deadly diseases are in Class 1, while seasonal influenza falls into the Class 5 category.

Measures must to be taken for each classification, such as whether hospitalization is required.

The novel influenza infection designation falls outside of the five-class system. Officials determined that it was still difficult to classify the novel coronavirus into one of the five classes because of the characteristics of its symptoms.

But the classification would still allow for a similar flexible response given to a designated infectious disease.

Other proposed changes submitted at the Jan. 12 meeting could lead to penalties imposed on COVID-19 patients who refuse to be hospitalized or who leave medical facilities without permission.

The proposed changes could also include punishments against people who refuse to cooperate with local public health offices trying to track infection routes.

One measure being debated would limit fines to those who have been infected and exclude individuals who were in close contact with an infected individual.

The revision would also give prefectural governors the authority to ask COVID-19 patients with minor symptoms or who are asymptomatic to rest and recuperate at home or a designated accommodation facility. Individuals who refuse to cooperate will be recommended for hospitalization.

(This article was written by Natsuki Okamura, Naoyuki Himeno and Shuichi Doi.)