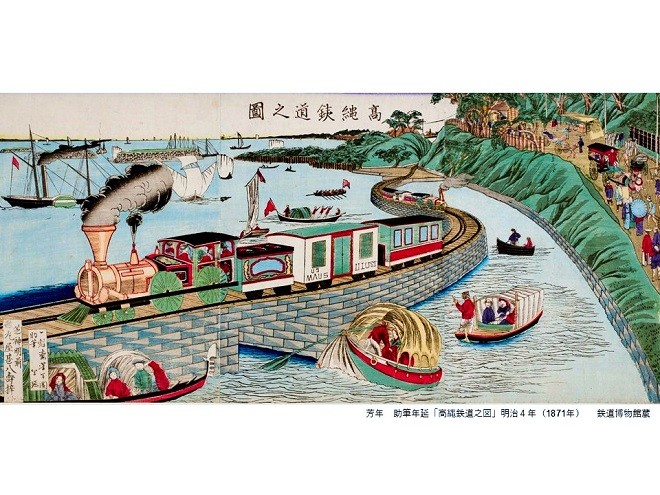 An important remnant in the history of the railroad in Japan--dating back about 150 years--is bound for preservation for future generations.

Ruins of a railway embankment built when Japan's first railway opened in 1872 were shown to the media on Jan. 8 near JR Takanawa Gateway Station in Tokyo's Minato Ward.

According to East Japan Railway Co. (JR East) and the ward's education board, the Takanawa Embankment had a width of about 6.4 meters. Built in the shallow waters of the sea, it was an embankment filled with soil and solidified with stone walls, with trains running on top of it.

Construction of the 2.7-kilometer-long embankment between present-day Tamachi and Shinagawa stations began in 1870. Met with objections from the then Ministry of War to have the route run near land, the maritime route was approved.

Some multicolored "nishiki-e" prints created at the time show a train running above the sea, but it was believed that the embankment had been removed when the area was reclaimed in or after the late Meiji Era (1868-1912).

Some of the stone walls were found during improvement work on Shinagawa Station in April 2019. Other sections were also excavated in July 2020 in an area surrounding Takanawa Gateway Station planned for redevelopment by JR East.

Currently, it has been confirmed that the ruins run for about 770 meters, according to JR East.

The railway operator intends to continue the survey with the ward's education board to seek ways for on-site preservation and relocation of the parts of the embankment.

"We think it is a very meaningful project with which we can pass down the history of railroad from the early Meiji Era (1868-1912) for future generations," a JR East representative said.