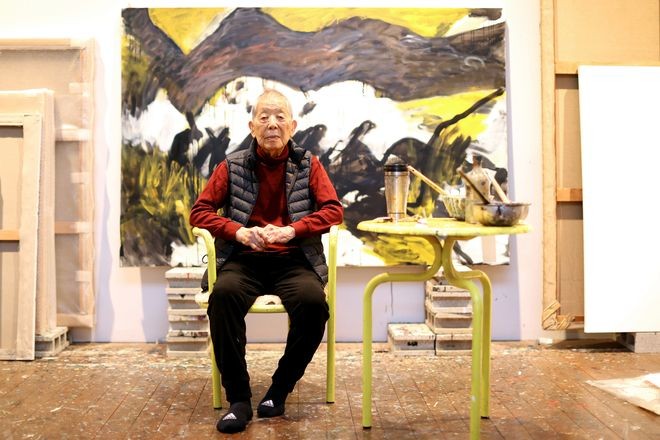 Gyoji Nomiyama is turning to painting to help get through the novel coronavirus pandemic. It’s what the centenarian had done to deal with previous crises, like the misery caused by World War II and the 2011 disaster in the Tohoku region.

The Cultural Medal-winning painter explained his never-diminishing passion for creating, as well as the persistent link between his works and his battlefield experiences in an interview with The Asahi Shimbun in December, which coincided with his 100th birthday.

Nomiyama’s works are characterized by a casual brushing style and the melting together of colors and shapes.

From March 3 through 15, the Nomiyama Gyoji Exhibition Celebrating His 100th Birthday will be held at the Kyoto Takashimaya department store to show 60 creations made between 1959 and 2020.

At his home and studio in Tokyo’s Nerima Ward, Nomiyama is currently working under a high ceiling on a monumental, fresh-looking picture featuring a yellow sky and black mountain-like objects.

“I depict only what I see with my eyes so this is not an abstract painting,” he said about the work. “But unexplainable patterns are used, so calling this a representational piece would not sound convincing.”

He continued, “Even if I try to create a painting in which anyone can easily distinguish fruits and flowers, it looks like they are floating in the air like this.”

Nomiyama said he was once told by a psychological expert that his “landscape painting” appeared to have been drawn while he was “swimming in the amniotic fluid in the womb.”

“I somehow feel that may be the case because I love diving in the sea,” Nomiyama said.
During his childhood, his neighborhood in the Chikuho region of Fukuoka Prefecture was filled with huge heaps of coal waste. He swam and dived in the nearby river and the ocean in Fukuoka city.

He owns another studio on the coast of Itoshima in the prefecture. He swam there almost every day in the summer until four or so years ago.

The young Nomiyama loved pictures so much that he studied oil painting at the predecessor of Tokyo University of the Arts. He was allowed to graduate from the school earlier than usual in 1943 to go to war.

In the border zone between China and the Soviet Union, Nomiyama saw enemy soldiers pointing guns at him through holes of an opposite trench and felt, “I will soon be killed.”

However, Nomiyama was sent back to Japan because of a lung problem. World War II ended while he was hospitalized at a medical center in Fukuoka Prefecture.

After the war, Nomiyama studied in Paris and established his foothold as a painter. In 1976, he joined a project of collecting pieces of art from bereaved families of painter students who died in the war.

The endeavor led to the foundation of the Mugonkan museum in Ueda, Nagano Prefecture, to commemorate the war-dead art students.
Nomiyama said he was motivated by his feelings of guilt for surviving the war.

“I feel like I fled and hid away,” he said. “I could have been among the students whose works went on display at Mugonkan, though.”

Nomiyama explained the appeal of the students’ art.

“They did not try to paint well or want to win prizes,” Nomiyama said. “So their works are simple and naive. They show the pictures that people are apt to draw when they know their lives will shortly end. The paintings began shining after being put on display.”

In June 2011, Nomiyama visited the Tohoku region to sketch areas devastated by the Great East Japan Earthquake and tsunami.

“When I was on the battlefield, I felt as if I had been crawling on the bottom of a huge coffin,” Nomiyama said. “I recalled that feeling and wondered what the quake-hit area would look like to me.

“It was impossible to give reason to the scenery there. The sights around me seemed like the bottom of the sea, giving the impression that I was again floating in water.”

More than 75 years have passed since the end of the war. And it’s been 10 years since the earthquake struck. But Nomiyama said he feels “nothing” about turning 100 years old.

He said he began figuring out “what aging actually is” only two to three years ago. He became unable to walk freely outdoors or eat quickly. Last year, he was hospitalized for pneumonia.

But in a health checkup in December, his doctor said there “are no problems to be noted.”

“I am standing while painting,” Nomiyama said. “Moving in front of the picture may work better for my health.”

“I tell people that I paint while I am awake, but I often take naps and nod off,” he said.

The veteran artist found painting “so exciting” only a few years ago.

“After graduating from the art school, I committed myself to certain goals and challenges as if battling against a strong enemy, such as attempting to paint like Georges Rouault, whose work impressed me,” Nomiyama said. “But I have discovered it (painting) is still interesting even without such supposed rivals.”

He advises younger generations “not to present one’s own opinions only but to think from the standpoint of others.”

Nomiyama is working on his latest creation under another state of emergency because of the novel coronavirus pandemic.

“I still love painting,” he said. “I do not want to die. I am alarmed at the disease because everything I have devoted my life to would come to naught if I die from the coronavirus.”

However, Nomiyama said he was more likely to be killed by a nuclear bomb.

“Humankind cannot refrain from using what has been created,” he said. “This belief comes largely from my experience of going to war as a serviceman.”