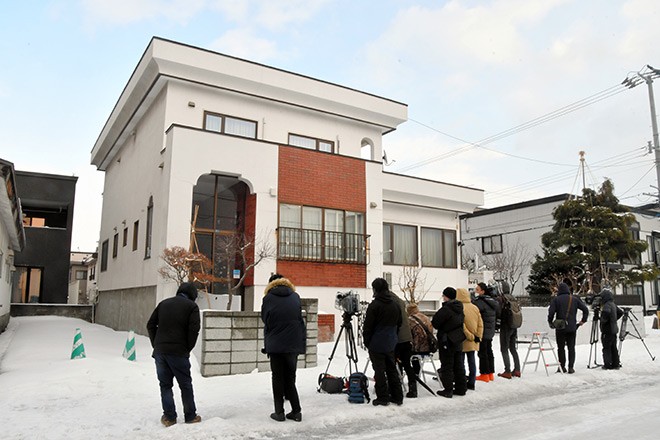 Reporters on Dec. 25 surround the home of former agriculture minister Takamori Yoshikawa in Sapporo, which was searched by prosecutors. (Asahi Shimbun file photo)

Tokyo prosecutors on Jan. 15 indicted a former agriculture minister who has admitted to receiving cash from a company under his jurisdiction but denied that it was bribe, sources said.

Takamori Yoshikawa, 70, was indicted on a bribery charge over 5 million yen ($48,000) he received from Akita Foods Co., a major egg producing company in Hiroshima Prefecture, when he was the farm minister in the Shinzo Abe Cabinet.

Both suspects were not arrested nor taken into custody. Yoshikawa underwent a heart operation at the end of 2020 and has since been in a hospital. Akita’s age was cited as the reason for not arresting him.

During voluntary questioning by prosecutors, Yoshikawa admitted to receiving the money but denied it was intended to buy his power, the sources said.

“I thought the money was a present to celebrate my ministerial appointment and resources to support my political activities,” the sources quoted him as telling prosecutors.

Akita, on the other hand, has told prosecutors that he gave the money “for the industry” and that he was “aware that the money was illegal and not supposed to be given (to the minister),” according to the sources.

Akita asked Yoshikawa to help the poultry industry by ensuring the Japanese government would oppose an international organization’s proposal for animal welfare standards to reduce the stress of livestock, the sources said.

For that purpose, Akita gave Yoshikawa 2 million yen on Nov. 21, 2018, at a hotel in Tokyo, and another 2 million yen at the minister’s office on March 26, 2019, according to investigators.

Akita also gave Yoshikawa 1 million yen at the minister’s office on Aug. 2, 2019, and asked him to make it easier for poultry farmers to receive loans from the government-related Japan Finance Corp., they said.

Yoshikawa, who has left the ruling Liberal Democratic Party and resigned from the Diet, issued a statement on Jan. 15.

“I am sorry for causing great anxiety,” the statement said. “I have sincerely explained my understanding (to investigators). I will also give a full explanation at the court and ask for its fair judgment.”

The LDP does not plan to field a candidate in an April 25 by-election for the Lower House seat vacated by Yoshikawa, Taimei Yamaguchi, chairman of the party’s Election Strategy Committee, said Jan. 15.

“We are keenly aware of our responsibility as a political party,” Yamaguchi told reporters, referring to Yoshikawa’s indictment. “We concluded that our top priority is to try to regain trust from voters.”

Some ruling and opposition lawmakers believe the LDP chose to skip the by-election for the Hokkaido No. 2 district to avert a possible blow to the Yoshihide Suga administration if an LDP candidate loses to an opposition contestant.

Prosecutors suspect Yoshikawa received a total of 18 million yen over the past six years from Akita. But the charge did not include 13 million yen that was apparently paid when Yoshikawa was not serving in any influential governmental position.