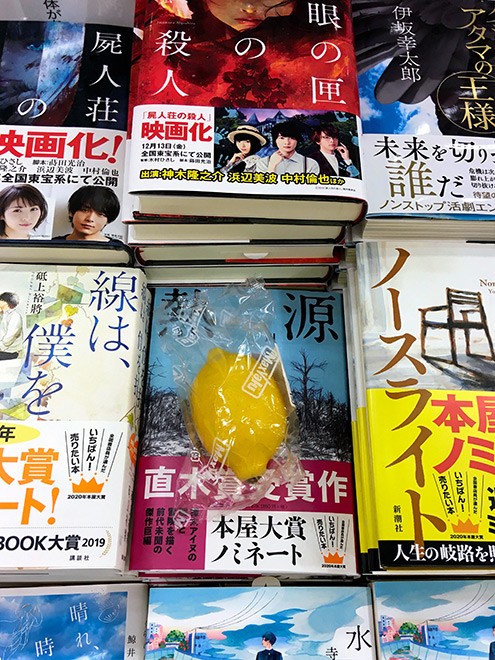 SHIZUOKA--The Toda Shoten bookstore here had long given Ayumi Saza the opportunity to escape into an endless number of adventures and tales through the books on sale.

So Ayumi, 16, was clearly shattered when her mother told her a few months ago that her beloved bookstore was planning to close for good.

But after reality set in, the teenager brainstormed on how to save the store, including becoming a millionaire herself and taking over the business.

When that idea proved futile, she hatched a plan to spend all her savings at the Toda Shoten store to buoy its business. The buying spree led to about five book purchases a month, not enough to stop the planned closure.

After Ayumi found she only had 52 yen (50 cents) left in her purse, she decided instead to express her gratitude to Toda Shoten.

She thought about expressing her feelings out loud or writing them down in a letter. But Ayumi tossed out those ideas because she thought they would not leave a strong enough impression on bookstore employees.

She wanted her expression of gratitude to remain in the memories of the store staff and perhaps even make them smile.

In her second year of junior high school, Ayumi came across a manga in which the last scene had the protagonist saying, “I’m going to leave a lemon at the bookstore.”

Not knowing what that passage referred to, Ayumi asked her Japanese language teacher what it meant. The teacher told Ayumi about “Lemon,” the work considered the best of Motojiro Kajii (1901-32).

Ayumi went to the bookstore section for classic works of literature and found Kajii’s “Lemon,” which describes a debt-laden and ill student becoming profoundly moved by the beauty of a lemon he bought at a grocery store.

On the day Toda Shoten was scheduled to close for good, Ayumi went to a neighborhood supermarket and bought the prettiest lemon she could find. She biked to a building in front of the train station and looked up at the Toda Shoten sign.

But on the final day for Toda Shoten, Ayumi spent more time walking between the entrance and cashier than looking over the books on the shelves.

In “Lemon,” Kajii’s protagonist, based on himself, goes to the Maruzen bookstore in Kyoto, creates a “castle” out of large art books and places a lemon on top before walking out of the store.

Ayumi stopped at the bookstore section that displayed works that had won the coveted Naoki Prize for seasoned writers.

“People are sure to notice this corner,” Ayumi thought.

She took out the lemon from her bag and placed it gently on the books while saying in her mind, “Please allow me to place this here.”

She then quickly walked out of the store.