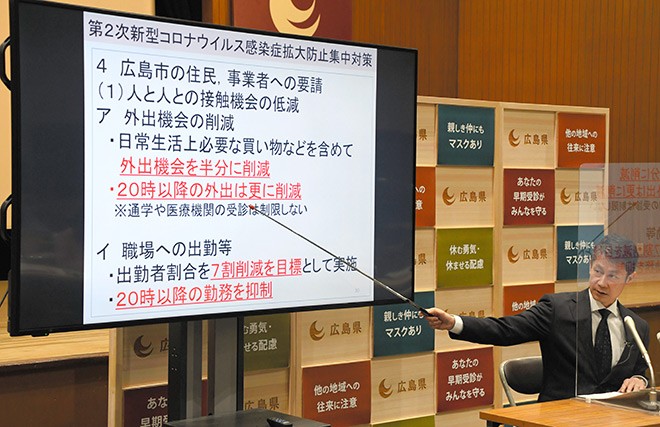 The government has ruled out providing special financial support to curb novel coronavirus infections to Hiroshima city, at least for the time being, citing a decline in new COVID-19 cases.

“The infection situation has been improving in recent days,” Yasutoshi Nishimura, minister in charge of responses to the pandemic, said on Twitter on Jan. 16. “We cannot determine that the city warrants (special support) at the moment.”

When the state of emergency was expanded to cover 11 prefectures on Jan. 13, the government said it is prepared to provide equivalent financial support to other local governments if they implement the same measures required of the 11 prefectures, including asking restaurants and bars to close at 8 p.m.

Nishimura said the following day that the government is in the final stages of coordination to qualify Hiroshima city for special financial support without a state of emergency declaration.

In his tweet, Nishimura said he has discussed the issue with Hiroshima Governor Hidehiko Yuzaki over the phone and that the two agreed that central and prefectural government officials will continue to closely monitor the infection situation in the city.

The Hiroshima prefectural government already decided to extend its request for restaurants and other facilities in Hiroshima to shorten business hours until Feb. 7.

Speaking to reporters in Hiroshima, Yuzaki said on Jan. 16 that the plan will be implemented as scheduled to “contain infections thoroughly and prevent a resurgence in infections.”

The Hiroshima prefectural government also plans to make polymerase chain reaction (PCR) tests available free of charge to residents of and workers in four central Hiroshima wards upon request. Up to 800,000 people will be eligible.

“Tests will be conducted on a voluntary, not on a compulsory, basis,” Yuzaki said at a news conference on Jan. 14. “But we expect people to take tests proactively.”