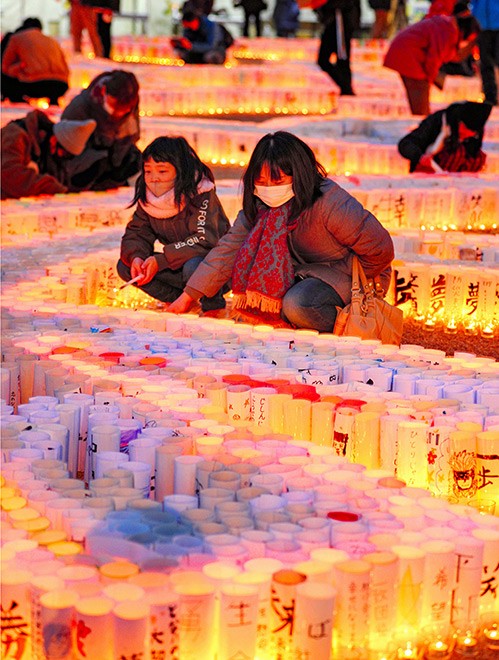 KOBE--Like many others, Tsuyoshi Nakayama had to grieve for a loved one lost in the Great Hanshin Earthquake 26 years ago on his own without friends or acquaintances this year, due to the coronavirus pandemic.

Nakayama, 52, was one of about 2,500 mourners who visited Kobe East Park, where a gathering to pay tribute to the victims was held early on the morning of Jan. 17.

They accounted for less than 20 percent of the attendees in 2015 on the 20th anniversary when attendance at the memorial ceremony peaked.

“This is my first time to come here alone,” said Nakayama, of Kobe's Higashi-Nada Ward, as he gazed at flames of bamboo lanterns at the park from a distance. “It feels lonely.”

He lost his 29-year-old sister Noriko when their home collapsed. Nakayama began volunteering at an elementary school he took refuge at to fill a void left by the loss of his sibling. He found solace in fellow volunteers who gathered from across the country.

On the eve of the anniversary, they used to assemble at an "izakaya" pub and kept talking before coming to the park to offer prayers at 5:46 a.m., the time the powerful earthquake struck. But it was not possible for this year’s anniversary amid safety precautions and scaled-back ceremonies.

“I would like to get together with friends next year, just we did before,” Nakayama said.

Hikaru Miyauchi, a college sophomore from Kobe’s Nada Ward, visited the park for the first time.

“I came here because I know there are many people out there in remote places who cannot come despite their strong wishes due to the pandemic,” he said. “I thought we who live near the park should come and pay our respects.”

Emiko Kisoi, 73, offered a prayer at her home in Nagoya’s Midori Ward, looking to the west toward Kobe.

A picture of her son, Motohiro, who was 23 and attending graduate school at Kobe University when he died in the quake, is placed in her room.

She had a protocol of observing the anniversary: visiting an izakaya in Kobe where her son worked part time; praying in her hotel room while facing the direction of his boarding house at the time the quake hit; and visiting the site where the boarding house once stood and a monument dedicated to the victims at his university.

But she had to forgo that somber ritual this year.

“The air in Kobe on Jan. 17 feels different from the rest of the year,” she said. “I wish I could have been in Kobe, thinking about my son there. This year, I followed the same procedures in my mind.”

(This article was written by Ryota Goto, Yuri Nishida and Junichi Takitsubo.)