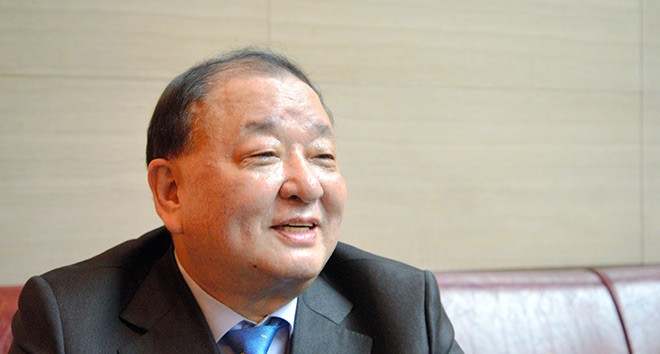 SEOUL--South Korea’s new ambassador to Japan said his country is ready to work hard to mend ties with Japan, after bilateral relations reached a postwar low when longstanding disputes boiled over.

“President Moon Jae-in has a firm intention to rebuild South Korea-Japan relations and intensify cooperation with Japan,” Kang Chang-il said on Jan. 17 at a news conference with Japanese media.

He was referring to comments that Moon made to him three days earlier, when the two met at the presidential office.

Kang also said the president is willing to do his utmost to help Japan host a successful Tokyo Olympics this summer.

Kang is a former lawmaker who retired from politics last year. As an expert on Japanese affairs, he led a group of South Korean legislators working to promote relations with Japan while serving as a member of the National Assembly.

Bilateral relations bottomed out in recent years when long-simmering disputes rose to the fore, such as those over compensating wartime Korean laborers and Korean women who were forced to provide sex for Japanese soldiers during World War II.

“South Korea and Japan must move forward, but cannot do that because of those historical issues,” Kang said.

The new ambassador described current bilateral relations as “the worst since the countries normalized diplomatic ties in 1965.”

He said South Korea and Japan have a host of challenges to grapple with together, including strengthening economic and security cooperation, responding to the novel coronavirus pandemic and successfully holding the Tokyo Olympics, along with declining birthrates and depopulation.

Kang underlined the need to move the needle on bilateral relations by citing historical examples of the two countries extending olive branches to each other.

He pointed to when the Korean dynasties sent diplomatic envoys to Japan during the Edo Period (1603-1867) despite the 1592-1598 invasions of Korea by Japan, and when Amenomori Hoshu (1668-1755), a Japanese Confucian scholar who sincerely championed diplomacy, worked as a bridge between the two countries.

“South Korea-Japan relations are in a cold winter now, but we need to prepare ourselves to welcome the spring thaw,” he said.