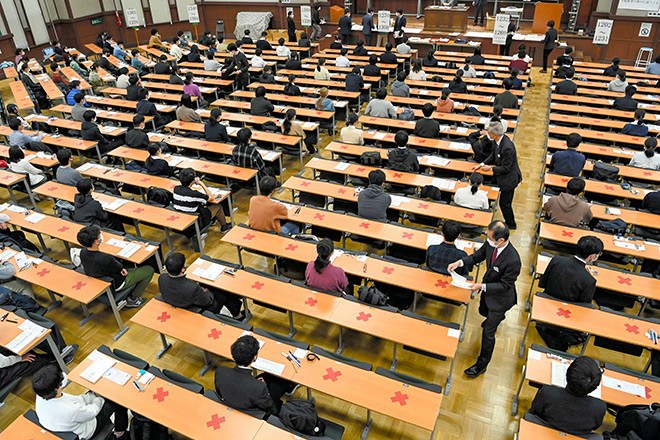 University entrance test-takers wait for the start of exams at the test venue of the University of Tokyo in Bunkyo Ward on Jan. 16. (Shinnosuke Ito)

On the first day of Japan's new unified university entrance examinations, a test-taker on Jan. 16 failed perhaps the simplest task of all: wearing a face mask properly.

Subsequently, the individual was disqualified for repeatedly refusing to pull the mask over the nose, the National Center for University Entrance Examinations announced on Jan. 17.

Amid the novel coronavirus pandemic, all participants in the two-day university entrance exams are required to properly wear masks as an anti-virus measure.

Examinees who are unable to wear masks due to special circumstances such as hypersensitivity are allowed to take the exams unmasked in another room if they apply for permission in advance. However, the test-taker in question did not apply for the special exemption.

“We made our decision comprehensively because the test-taker, who was not even coughing, continued not to cover the nose intentionally," an official of the national center said.

“It is not misconduct to occasionally uncover noses  when participants feel difficulty in breathing. The test-taker was disqualified for repeatedly refusing to follow the instructions.”

According to the national center, while the test-taker was taking the exams for the four subjects of geography and history, civics, Japanese and foreign language at a test venue in Tokyo, test proctors asked the individual six times to cover the nose. But the testee refused to do so.

Even after the test-taker was warned of being disqualified for disobedience, the individual still left the nose uncovered. As a result, the behavior was ruled as misconduct.

According to the national center, the test-taker did not explain the reason for the refusal and did not appear to have any special circumstances to justify the behavior.