A choir sings “Shiawase Hakoberu yo ni” (Bring Happiness to the World) under the baton of Makoto Usui, who composed the song, on Jan. 17 for the last time before his retirement as a teacher. (Ryota Goto) 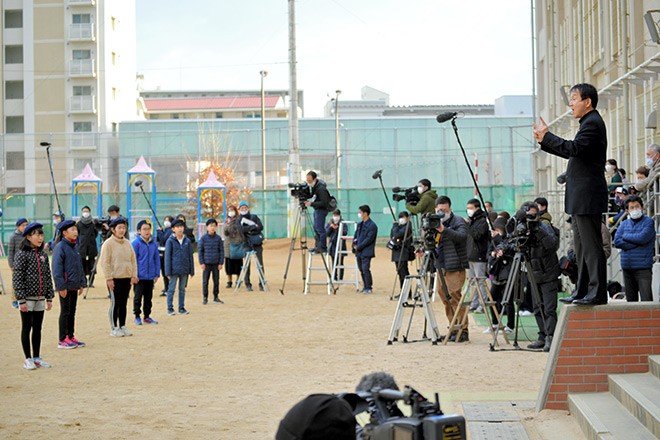 KOBE--A tribute song for the victims of the 1995 Great Hanshin Earthquake that devastated this city 26 years ago to the day was made Kobe's second official song on Jan. 17.

“Shiawase Hakoberu yo ni” (Bring Happiness to the World), a song for chorus groups composed by music teacher Makoto Usui, was first performed not long after the quake hit on Jan. 17, 1995, at Azuma Elementary School in the city’s Chuo Ward.

“It's a symbolic song that residents still sing even today to express hope for Kobe's reconstruction from the disaster,” a Kobe city official said, explaining the choice.

Usui was teaching music at Azuma Elementary School when the quake struck and composed the song immediately after seeing the disaster.

Following the quake, the school was turned into an evacuation center and Usui's students sang his song to evacuees there.

Now 60, Usui returned on Jan. 17 to the schoolyard where the building of Azuma Elementary School, which closed in 1997, still stands, to conduct a performance of his song by 50 or so sixth-grade students.

The performance, by a chorus group from the municipal Takaha Elementary School in Kobe’s Nada Ward, which Usui advises, marked the final time he will conduct the song as a teacher on the day marking the disaster's anniversary. Usui will retire from teaching in March.

"It's like a miracle. I'm overwhelmed with emotion," Usui said of the performance.

“I sang the song with determination to keep telling people about the earthquake,” said Yu Utsumiya, 11, a member of the chorus group.

Usui wrote the song just two weeks after the quake to express his heartbreak over the disaster, which claimed the lives of 6,434 people, mainly in Hyogo Prefecture.

Since then, the song has been performed at many other elementary schools in the city as well as the Kobe Luminarie, an annual winter illumination event to remember the victims of the earthquake, and at Coming of Age ceremonies.

“I’ve tried to remain true to what I wrote in the song by carrying memories of the disaster,” he said.