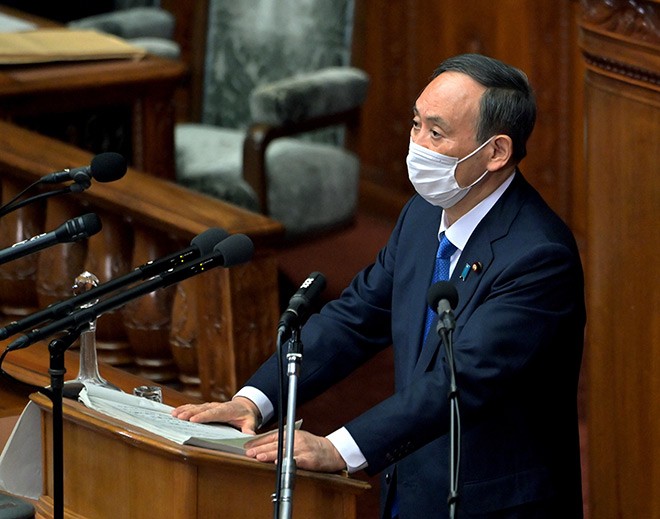 Prime Minister Yoshihide Suga gives a policy speech at a plenary session of the Lower House on Jan. 18, the opening day of the current ordinary Diet session. (Kotaro Ebara)

Stung by heavy criticism for his administration's slow response to the escalating public health crisis, Prime Minister Yoshihide Suga on Jan. 18 apologized and vowed to go all in to contain the coronavirus pandemic.

“I am deeply sorry about having to ask the public to restrict their activities” through the fresh state of emergency, he said in his policy speech to the Diet. “While seeking cooperation from the population, I will stand on the front lines to combat the battle and overcome the difficult situation.”

Suga's address on the opening day of the 204th ordinary Diet session followed the declaration of a state of emergency for the greater Tokyo area on Jan. 7, as well as seven other prefectures, including Osaka, Kyoto and Aichi, on Jan. 13.

The emergency, the second after the first one last spring, is expected to continue through Feb. 7. It is based on the government’s awareness that the virus is now spreading rampantly, the most serious stage of the four-level alert.

Suga vowed to “prevent an explosive growth in new COVID-19 cases” in his speech during the extraordinary Diet session from late October to early December.

But his administration’s push to resume economic and social activities hastened the spread of the virus, forcing the Diet to deal with the pandemic as the top priority in its current session, among other issues.

“We will lead the country to get out of the current stage early,” Suga said.

Suga said the government will submit a bill promptly to revise the special measures law to fight the novel coronavirus and make authorities’ requests for restaurants to operate shorter hours more effective. Proposed revisions are aimed at imposing a penalty on establishments that do not comply and providing relief packages to businesses.

Regarding the Tokyo Olympics and Paralympics this summer, Suga repeated his focus on hosting the events despite growing public concern.

“We will proceed with preparations with our determination to hold the events that will give hope and courage to the world while taking thorough precautionary measures,” he said.

While the pandemic suspended the flow of incoming tourists to Japan, the prime minister said Japan will resume efforts to become a world tourism powerhouse after the pandemic is brought under control. Suga has long championed inbound tourism.

As for other policy issues, he said green energy and digital technology to improve efficiency will be two pillars to expand Japan’s economy.

Suga said his government will strive to have all new cars by 2035 to be hybrids or electric vehicles. The agency for digital transformation, which he also is pushing, is expected to be formed in autumn.

Suga offered a fresh apology for making a false statement in the Diet while he served as chief Cabinet secretary concerning a scandal involving banquets held for Prime Minister Shinzo Abe's constituents on the night before the annual tax-funded cherry blossom-viewing parties hosted by Abe.

“I deeply regret and apologize for my comments in the Diet that were in conflict with the facts,” he said.

Despite his earlier denials in the Diet, Abe acknowledged late last year that his side covered the shortfall between the cost of banquets and the fees participants were charged with for the events his support group hosted at a Tokyo hotel.