Woman on the hook for 600-km taxi fare to Tottori 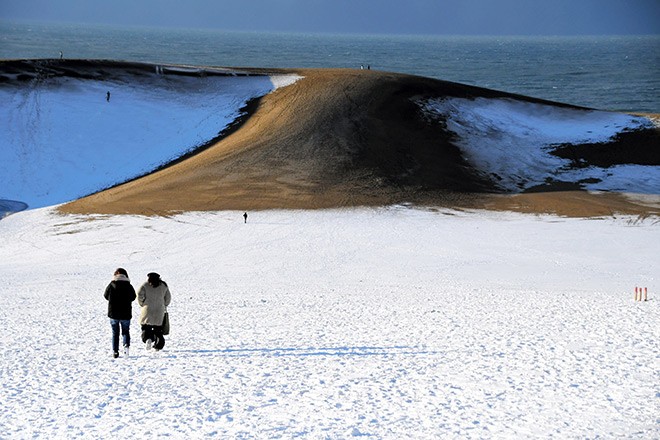 The Tottori Sand Dunes in Tottori is practically deserted on Jan. 9 partly due to heavy snow. (Nana Miyagi)

TOTTORI--Police arrested a woman on the spot for allegedly refusing to pay the expensive fare she racked up riding a taxi for more than 600 kilometers so she could see the famed Tottori Sand Dunes.

The Tottori Police Station in Tottori Prefecture announced on Jan. 17 that a woman, whose name and address are unknown, was arrested on suspicion of fraud. She is admitting to the charges, sources said.

The woman is accused of hailing a taxi in front of JR Totsuka Station in Yokohama’s Totsuka Ward at around 2:30 a.m. on Jan. 17 with no intention of paying the fare, according to investigative sources.

She allegedly failed to pay a whopping 236,690 yen ($2,300) on the taxi meter after arriving near JR Tottori Station in Tottori city about eight hours later so she could see the prefecture’s big tourist draw, sources said.

The woman reportedly told the driver she wanted to see the Tottori Sand Dunes and that she would withdraw the money to pay the fare when she arrived at Tottori Station.

But the driver instead drove the woman to the police station because she refused to pay the fare even after they arrived at their destination, sources said.

The woman appears to be in her 40s and had only several hundred yen in her possession, sources said.