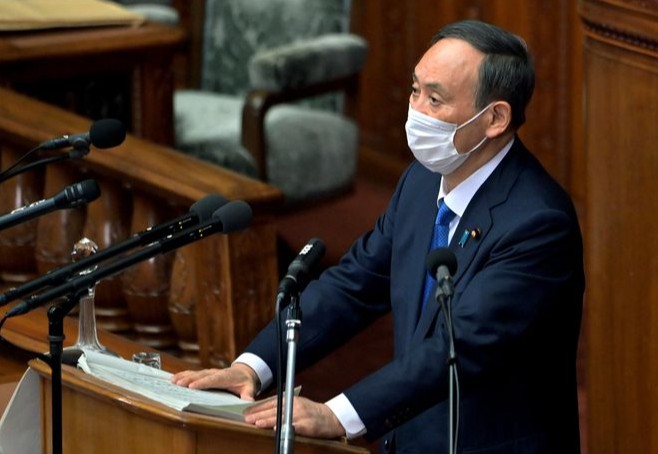 Prime Minister Yoshihide Suga delivers a policy speech during an ordinary Diet session in the Lower House in Tokyo on Jan. 18. (Kotaro Ebara)

It was such an utter letdown, it made me slump to the floor.

I am referring to Prime Minister Yoshihide Suga's first policy speech as prime minister on Jan. 18.

I could liken it to a novel you started reading with anticipation, only to find it devoid of any climactic scene. Or a film so boring that it puts you to sleep.

The only time Suga displayed something akin to personal conviction was when he mentioned his political mentor whom he respected deeply--the late Seiroku Kajiyama (1926-2000), a Liberal Democratic Party bigwig who served as chief Cabinet secretary in the late 1990s.

Suga recalled that he was a rookie Diet member when Kajiyama advised him, "Your job is to provide 'kuibuchi' to the Japanese people."

Kuibuchi, which translates literally as "one's sustenance," derives from the word "fuchi" which, in feudal Japan, denoted rice that every samurai received from his lord and master.

It is said that the standard payment amount of rice per day for one samurai was five "gou" (approximately 750 grams).

Come to think of it, food policy was Kajiyama's forte. He once proposed a business program to "promote biotechnology with an eye to developing a new strain of rice, every grain of which will be as big as a human head."

Starting out as a prefectural assemblyman, Kajiyama was known as a "militant" for sometimes criticizing the prime minister even more harshly than any opposition legislator ever dared.

Also a committed pacifist, he tackled Okinawa's base problems with passion. And he stood out as an eloquent speaker with a grasp of the big picture in the policies he envisioned.

"Since taking over the reins of government four months ago, I have been racing at top speed to propel this nation forward," Suga boasted in his policy speech.

However, after starting out with extraordinarily high approval ratings, his popularity has continued to plummet. In poll after poll, "non-approval" numbers have exceeded "approval."

There is no question that Suga's overdue COVID-19 pandemic responses and constant indecisiveness have eroded the public's faith in his administration.

How is Suga going to lead the nation through this crisis?

Obviously, securing people's sustenance is of crucial importance, but that's contingent on protecting them from the virulent virus.

Precisely because of the dire situation, I really wanted to hear Suga's resolve as our leader, spoken with the fiery passion reminiscent of his erstwhile mentor.