EDITORIAL: Suga’s policy speech gets an ‘F’ on pandemic, other points 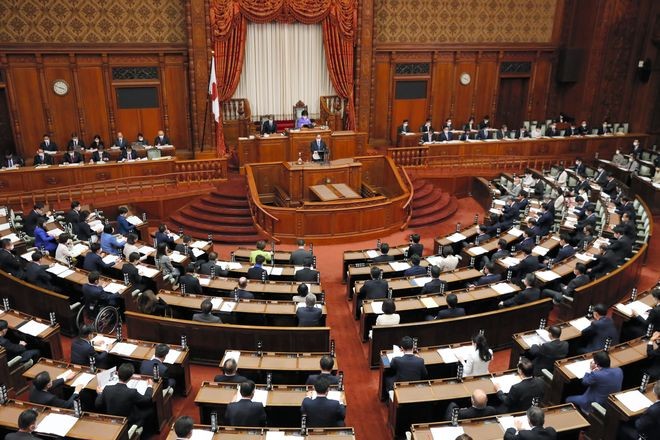 This year’s ordinary Diet session was convened on Jan. 18 amid Japan’s spiraling COVID-19 crisis, which has forced Prime Minister Yoshihide Suga to declare a state of emergency for Tokyo and 10 prefectures.

Obviously, the most urgent task for the government right now is to stem galloping infections with the new coronavirus. While sharply increased COVID-19 cases are threatening to overwhelm the nation’s health care system, political leaders and policymakers have failed to send out clear and convincing messages urging the people to change their behavior.

The ruling and opposition parties should work together to map out effective plans to protect the lives and livelihoods of the people.

At the same time, it is also vital to restore the ability of the Diet to hold the government accountable for its actions as well as the healthy tension between the legislature and the administration.

The Diet functions as the government’s watchdog, and the checks-and-balances relationship between the administrative and legislative branches was seriously undermined during the previous Abe administration.

First of all, the Suga administration must confront the “negative legacies” from the previous administration and make every possible effort to regain public trust in the governing system.

Unfortunately, Suga’s policy speech to open the current Diet session on Jan. 18 should be given an "F" on all these points.

Take his remarks on the pandemic, for example. Suga pledged to contain the virus “as early as possible” and “stand on the front lines to combat the battle and overcome the difficult situation.”

He referred afresh to the announced measures, such as ensuring shorter business hours at restaurants and bars.

At a time when many Japanese are skeptical about his promise to improve the situation swiftly so that the state of emergency can be lifted within a month, what he needs to offer is not more strong-sounding pledges but specific and convincing prospects for the coming weeks and months.

Referring to the bill to revise the special anti-pandemic measures law his administration is seeking to get passed quickly, Suga said it will include provisions for punishment and support to boost the effectiveness of government requests for shorter operating hours at eating and drinking establishments.

But public opinion is divided over the proposed introduction of penalties for noncompliance, which critics warn could threaten people’s freedom and rights and prove less effective than expected.

Does he believe that such a terse reference to the issue could win public support for the controversial proposal?

Suga did no better in discussing the government’s relationship with the Diet. Suga admitted making “false” statements in the Diet while he served as chief Cabinet secretary concerning a scandal involving banquets held for Abe's supporters on the eve of tax-funded cherry blossom-viewing parties hosted by the then prime minister.

Suga touched on the issue at the end of his speech and said he is “very sorry” and offered “apologies.”

But Suga only apologized for his own remarks, which were in line with Abe’s explanations about the matter. Suga failed to signal to the Diet that he, as the chief executive, is taking the matter seriously and committed to taking steps to prevent a recurrence.

Suga did not even mention a bribery scandal involving former farm minister Takamori Yoshikawa, who was indicted last week for receiving 5 million yen ($48,000) from a major egg producing company when he was in office.

Suga also neglected to discuss his much-criticized decision to reject six of the nominees to the Science Council of Japan as he did in his policy speech for the autumn extraordinary Diet session. He offered no meaningful explanation about it.

Suga said, “For a politician, public trust is more vital than anything else.”

But we cannot but help doubt if he is speaking from the heart and making serious efforts to fulfill his responsibility to explain his actions and decisions.

This year, Japanese voters will go to the polls to elect the Lower House for the first time in four years.

We urge Suga to demonstrate his commitment to offering sincere and straightforward responses to criticisms from the public during the Diet debate that starts on Jan. 20.