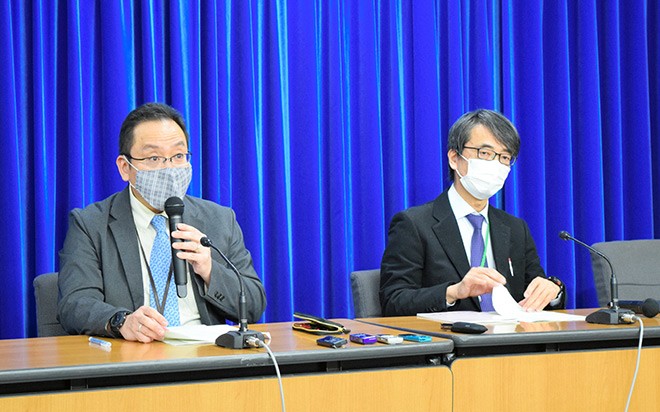 Three Shizuoka Prefecture residents were confirmed infected with the novel coronavirus variant found in Britain despite having no travel history to the country, Japan's first reported cases of community transmission of the more contagious strain.

The health ministry announced on Jan. 18 that the variant was detected in samples taken from three people in their 20s to 60s who had neither traveled abroad recently nor had contact with overseas travelers, indicating that they contracted it through community transmission.

Takaji Wakita, head of the National Institute of Infectious Diseases, however, ruled out the possibility that the variant is spreading in Shizuoka Prefecture, during a news conference the same day.

“At the moment, the mutated strain of the virus is not the dominant variant spreading in the area,” Wakita said, though he called for a stronger analysis of patients' samples.

Two women in Shizuoka, one in her 20s and another in her 40s, along with a man there in his 60s, tested positive for the variant, the ministry said. The woman in her 40s had close contact with the patient in her 20s.

All three developed COVID-19 symptoms in early January and later tested positive for the virus. The National Institute of Infectious Diseases was analyzing samples taken from them after their infections were confirmed.

All are currently recuperating at home, the ministry said.

Samples taken from the women in their 20s and 40s were examined as health officials were tracing infection routes of another COVID-19 patient who was suspected of having contracted the coronavirus variant.

After the two women were confirmed infected with the variant, the officials began an intense analysis of samples taken from other COVID-19 patients whose infections were reported by the same public health center where the women’s cases were discovered.

The analysis revealed that the man in his 60s had the coronavirus variant.

The variant was also detected in samples taken from a man in his 20s who returned from Britain on Dec. 31.

The latest cases bring the total number of people confirmed infected with the variant in Japan to 45.