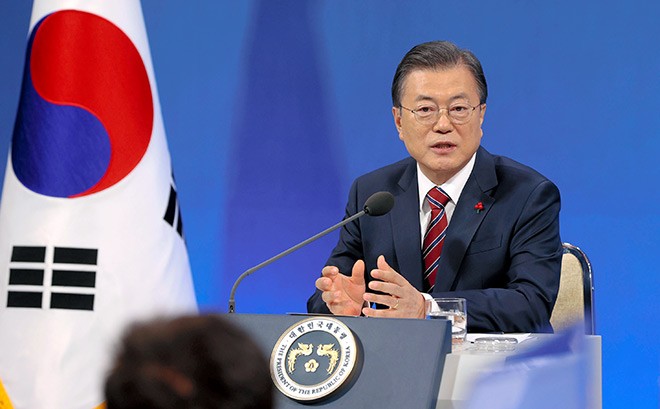 Japanese officials are far from convinced by South Korean President Moon Jae-in's attempt to mend fences with Tokyo during a news conference on Jan. 18.

Moon for the first time said it was not desirable to have South Korean courts sell off assets of Japanese companies in South Korea to compensate former wartime laborers.

He also expressed bewilderment that the Seoul Central District Court ordered the Japanese government to pay compensation to 12 former "comfort women," who were forced to provide sex to Japanese military personnel before and during World War II.

But Masahisa Sato, director of the ruling Liberal Democratic Party's Foreign Affairs Division, brushed away Moon's apparent olive branch, saying, “It is we who are bewildered. (Moon’s comments) had nothing specific that could lead to a resolution” of the issue.

Sato's comment, made in Tokyo on Jan. 19 at a meeting of LDP lawmakers, was echoed by Foreign Minister Toshimitsu Motegi.

“It is difficult to evaluate what was basically only an expression by the South Korean side of their desire to resolve the issue,” Motegi said at a news conference the same day.

Moon also for the first time acknowledged the 2015 agreement reached by the administration of his predecessor and Japan to create a foundation to provide support to former comfort women.

He added that he hoped to resolve the court issue regarding compensation for the former comfort women through further diplomatic negotiations.

But a high-ranking Foreign Ministry official dismissed the idea, saying, “This is not an issue open to negotiations, but one that the South Korean side must resolve.”

LDP lawmakers said Moon’s comments were likely intended more as a message to incoming U.S. President Joe Biden rather than to Tokyo since there was no fundamental change in Seoul’s position regarding the two issues.

Moon may have been trying to show Biden that efforts were being made to improve ties with Tokyo. The 2015 agreement on the former comfort women was pushed along by Biden when he was vice president under then-President Barack Obama.

Moon’s comments may also be an indication that the stage had been reached when a political decision at the highest levels was needed to resolve the issues surrounding the former wartime laborers.

A source close to the South Korean presidential office said almost all options available to diplomatic negotiations had been used and that only a political decision remained as a possible solution.

But the recent Seoul court ruling ordering compensation for the former comfort women has thrown a new wrench into Moon’s plans to improve ties with Japan.

At his Jan. 18 news conference, Moon said the solutions had to be sought separately for the various issues connected with Japan rather than trying to combine them under the historical issue banner.

But a former high-ranking South Korean government official said, “The problem is that (Moon) has not presented any specific measures to resolve the issues.”

Moon may have made the process even more difficult, others were saying, because he said that resolving the court cases involving the former wartime laborers and comfort women would require the consent of the plaintiffs.

Sources said that meant that all those involved in the various lawsuits would have to give their consent before a resolution could be reached with Japan.

(This article was written by Takeshi Kamiya in Seoul and Ryutaro Abe in Tokyo.)