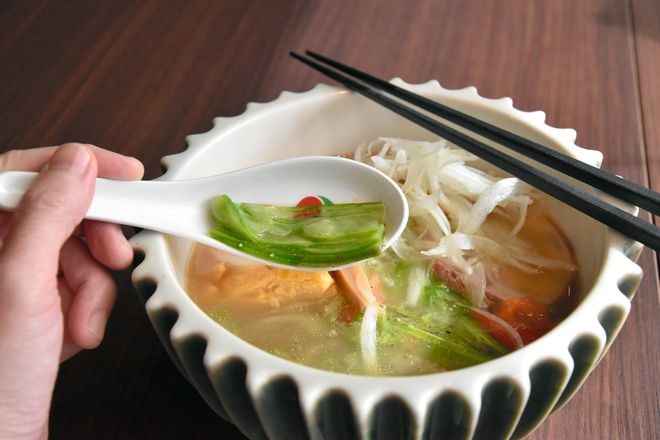 The professional chef’s early days experimenting at cooking with the local specialty were particularly thorny. But in the 16 years since then, cacti have become a tasty and popular mainstay ingredient at his Chinese restaurant, Shisen, here.

Hase learned it takes a village to create a delectable cactus dish, and it all started with one stranger passing through town.

“I would have given up on cacti were it not for the man’s words,” recalled Hase, 63.

Hase began cooking with succulents in 2005 for a local cactus-themed event.

He bought some cacti from a farmer, then cut and boiled them to resemble “menma,” or pickled bamboo shoot, a common ramen topping. However, it tasted “too bad for mankind to consume.”

Swallowing the food was practically impossible because the sturdy fibers were so tough that they had to be removed from the mouth.

Discouraged, Hase made up his mind to “never use cacti again.”

But then he was suddenly caught off guard by a deluge of requests for interviews from magazines and TV broadcasters. The local newspaper Chunichi Shimbun had reported on his unique ramen and word quickly spread, making it “difficult to abandon the dish, despite my wish.”

So, Hase decided to keep serving cactus ramen at his restaurant--temporarily. When the ramen fever ended a few months later, Hase once again began to consider removing the dud from the menu.

But then a man who visited Kasugai to buy cactus seedlings showed up at his restaurant asking to try the ramen that had gotten so much attention.

He suggested Hase use new sprouts when cooking cacti. Hase had bought cacti from a farmer and used them as they were, not giving much consideration to the stage at which they would be best prepared.

So, he tried making it with freshly sprouted prickly pears, or "uchiwa saboten" (hand fan cactus) in Japanese. Diners no longer had to deal with tough cactus fibers. Instead, the dish boasted a unique crispness and stickiness, along with a faintly sour taste.

“I can make it with this,” Hase thought to himself.

One problem that remained unsolved, though, was that when used as an ingredient, cacti have “no strong features,” despite their prickly appearances.

Because a cactus is made of 99 percent water, seasonings will only dull the plant’s flavor.

Hase tried cooking cacti in “yakisoba” noodles, chili sauce and many other meals.

Around that time, the Kasugai Chamber of Commerce and Industry and other organizations had started a project to develop more cactus-based food that can be promoted as regional specialties and raise the city’s profile. They enlisted Hase, a pioneer in the field, to help pitch a new cactus ramen together.

Locals had the chance to sample the dish while it was still under development, and, just as Hase thought, many participants pointed to “the lack of uniqueness” offered by the cactus ramen topping.

They solicited various ideas from participants at each of the sessions, and eventually decided on mixing cactus paste into the noodles, adding Chinese yam to the plant and offering it with tomatoes.

It took a total of three years to distill 100 individual opinions into the ramen dish, now a staple on Shisen’s menu.

Thanks to a little help from his friends, he honed the recipe into a much sought-after dish that takes full advantage of the plant’s unique texture and flavor.

“Cactus ramen is not a meal my eatery created all on its own,” said Hase. “The dish is full of opinions from people in Kasugai.”

His popular cactus ramen is now served up at his Chinese restaurant, Shisen, in an eye-catching green bowl with a serrated surface designed in the image of a cactus.

Lifting the soup noodles up from under the toppings with chopsticks reveals the inviting vibrant green color of its featured ingredient.

At the center of the bowl is Shisen’s original mixture of cactus and Chinese yam paste, which gives the delicious soup a slightly sticky and savory mouthfeel. The paste is mixed into the noodles, which go down smoothly and pair well with the broth, which has a lightly salty base of pork, chicken and dried shrimp.

Thin slices of raw cactus garnish the paste, offering a crisp crunch and faintly sour flavor, served up alongside diced tomatoes and some black pepper for a little bit of kick.

Even though cactus is not a popular food in Japan, the ramen has now been a big draw for 15 years.

Native to the Americas on the other side of the world, cactus has become a local specialty of Kasugai in the bedroom suburbs of Nagoya. Local farmers grow an edible species here, which allows a host of restaurants to boast a variety of cactus-inspired dishes.

Kasugai, which calls itself “cactus town,” prides itself as one of Japan’s leading cactus-producing regions and had previously generated the largest amount nationwide. Seven farmers currently produce the plant in Kasugai.

ON THE MENU AT SHISEN

Hase grew up in Komaki, located just outside Kasugai. Before Shisen opened in 1984, he cultivated his cooking chops at other famed restaurants in Yokohama's Chinatown and elsewhere before getting a taste of cactus cooking culture. He has since been catering to customers here for more than 35 years.

While its menu boasts the popular ramen dish that shares the name of the shop, the restaurant also whips up some mean mapo tofu, shrimp chili and an assortment of other dishes decorated with cacti.

The specialty cactus cuisine is offered at the restaurant in four styles: ramen, gyoza, croquette and salad. It uses locally produced prickly pears. Its coveted cactus ramen is priced at 880 yen ($8.46), including tax.

The restaurant has several items that pair well with cactus, including the “tamagoyaki” omelet, not to mention menma, roast pork and other ramen toppings, so diners can experiment to see which are the best matches.

The prickly pear cactus Hase uses is shaped like a flat oval fan. The transparent, difficult-to-see spines on its surface must be carefully rubbed out before cutting the surface sprouts with a knife.

About 300 grams, or half a standard-size piece of prickly pear, are used for a bowl of ramen. Shisen only buys fresh shoots and gets them from a local farmer.

Hase is still working on developing new meals based on cactus. He said he dreams of one day creating a recipe for a dish that can be cooked only with cacti, like the Okinawan stir-fry dish “goya chanpuru” that requires balsam pears.

But given the difficulty of such a Sisyphean task, Hase sometimes considers promoting cactus over developing new recipes, so that it “will become widely accepted as healthy food in society.”

Cacti are said to be rich in dietary fiber, calcium, vitamins and other nutrients, and helpful in preventing lifestyle-related diseases such as arteriosclerosis and diabetes.

Although that promotional work on its own could take half a century or more before seeing results, Hase is determined to do whatever it takes to ensure the popularity of the regional specialty persists.

“It would be unforgivable if Kasugai’s cactus culture comes to an end,” Hase said. “I will do everything I can to stop that from happening.”