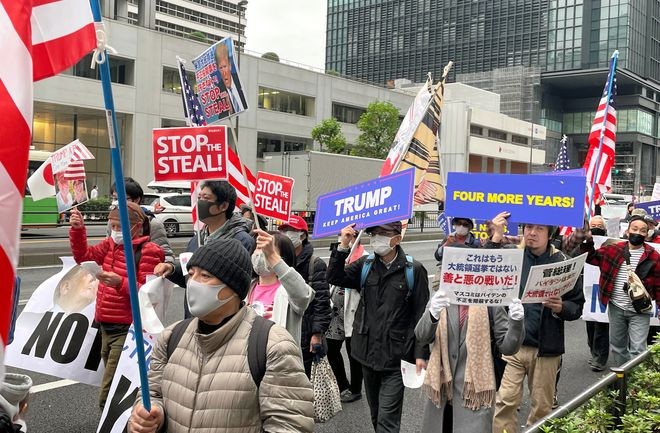 Demonstrators march in Tokyo’s Chiyoda Ward on Nov. 29 to express their support for Donald Trump and his argument that the U.S. presidential election was “rigged.” One placard says the presidential race is a “fight between good and evil!” (Asahi Shimbun file photo)

A small group of Japanese fans of Donald Trump took to the streets of Tokyo on Wednesday, shouting support for the outgoing United States president hours before his successor Joe Biden is sworn into office.

About 120 people joined the march in central Tokyo, with participants waving American and Japanese flags and holding banners claiming Trump was "the true winner" of the Nov. 3 election.

"We wanted to show that many people in Japan are supporting President Trump," rally organizer Naota Kobayashi told Reuters. "We all chanted together so that our voice can fly over the Pacific Ocean and reach the U.S."

Some Trump fans in Japan are drawn to his hard-line stance against regional rival China. Others like Kobayashi are part of conservative Christian sects, while still others are adherents to QAnon--a conspiracy theory that posits that Trump is secretly fighting a global cabal of child-sex predators that includes prominent Democrats, Hollywood elites and "deep state" allies.

Tokyo has seen a series of pro-Trump demonstrations since the election, with participants waving his campaign banners and wearing his signature red caps. Wednesday's march was smaller than some previous events.

Biden became the 46th U.S. president at a ceremony in Washington that has been greatly scaled back due to both coronavirus precautions and security concerns following the Jan. 6 assault on the U.S. Capitol by supporters of Trump.