EDITORIAL: Biden will be severely tested in ability to restore world order 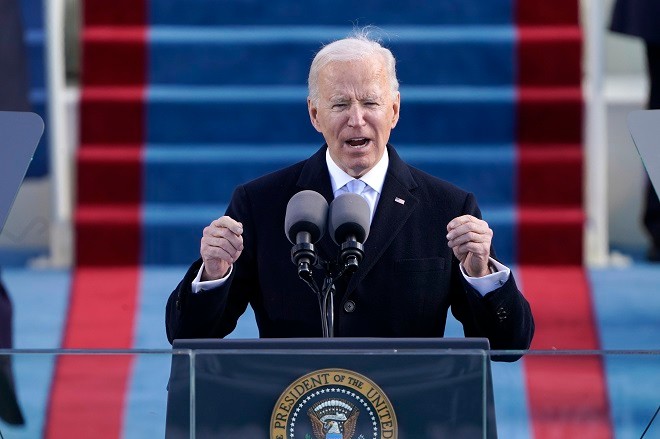 Never has a new U.S. president been sworn in amid such a depressing atmosphere.

Usually, a presidential inauguration in the United States is a festive event that celebrates the basic principles of democracy. The international community listens carefully to the words spoken by the new leader of the superpower to find signs of the direction the president intends to lead the world during the next four years.

But the United States is now suffering badly from a deep division in society and a decline in its prestige as well as the ravages of the new coronavirus pandemic.

Even though the rough-and-tumble administration of former President Donald Trump is gone, the outlook for the country remains murky with sticky policy challenges on both the domestic and diplomatic fronts waiting to be addressed.

President Joe Biden has started his presidency in a stormy political climate that will severely test his ability to unite the nation and provide effective international leadership to restore order in the world.

Washington is still reeling from the profound trauma caused by the storming of the Capitol.

Up to 25,000 troops were mobilized to protect Biden’s inauguration. That is more than the combined number of U.S. troops currently stationed in Iraq, Afghanistan and Syria.

Trump refused to attend the ceremony, becoming the first outgoing U.S. president to skip the inauguration of his successor since Andrew Johnson did so in 1869, four years after the end of the Civil War.

The acrimonious political conflict in the United States has torn apart American society as if it had brought Cold War thinking into the country. A survey has found that one-third of Americans do not recognize Biden as the legitimate president.

Meanwhile, the U.S. COVID-19 death toll has passed 400,000. It is said that the massive loss of lives amid a deepening social schism is reminiscent of the Civil War era in the 19th century.

Biden, 78, took office as the oldest president in U.S. history, taking on the mission of leading the politically fractured nation through these difficult times. Probably the most important of his leadership qualities is his ability to show empathy.

As he struggled to overcome a stutter as a child, Biden has said, he developed “an insight I don’t think I ever would have had into other people’s pain.”

After he started pursuing a political career, he also endured two family tragedies: his wife and baby daughter were killed in a car accident in 1972 and one of his two sons who had survived the crash died of brain cancer in 2015.

Amid the COVID-19 crisis, the American people yearned for a leader who can “empathize with others.” Hopefully, Biden’s diverse Cabinet, including Kamala Harris, the first female vice president, indicates his commitment to healing the wounds caused by social conflict.

It is difficult to deny that Biden’s election was helped by many voters’ passive support for a moderate candidate as they were fed up with the Trump administration’s disruptive effects on democratic norms.

His long political career, which includes holding the office of vice president and many years of service in the U.S. Senate, will undoubtedly help him a lot. But he will not be able to deal with the many formidable challenges confronting the nation by simply drawing on the past.

Biden will be required to shed light on various problems that have grown within deep layers of society over decades of failure to tackle them by the successive administrations.

One key challenge will be rebuilding and revitalizing the American middle class, which has been eroded by radical changes in the industrial structure. Others include propping up the generous immigration policy that used to support the resiliency of American society, and enhancing the nation’s social vitality and technological innovation prowess.

If he fails to tackle the deep-seated problem of economic disparities, Biden will be unable to prevent the resurgence of Trumpist populism. He needs to adopt an inclusive governing approach that can help the country overcome various divisions.

From the viewpoint of international politics, the Trump administration totally ended the U.S. supremacy seen since the end of the Cold War era. Many observers have been talking about a return to the era of “war of great powers” and the “new Cold War” between the United States and China for global hegemony.

But old thinking will not help deal with the new global situation, either. In this era of globalization, which inevitably increases mutual dependence among nations, dichotomous thinking cannot work effectively for solving international issues.

The Biden administration should embrace a shift from the traditional security policy based on the interests of individual nations. Since it will be difficult to reverse the trend toward a relatively smaller U.S. presence and influence, it will be a reasonable option for the new U.S. government to beef up its alliances with countries that share democratic values.

It is more important than ever to establish solid international cooperation to respond effectively to such global challenges as climate change, infectious diseases and the need for a new international framework for trade and tariffs. Biden will have to bear the heavy responsibility to stem the global proliferation of “me first” policies and authoritarianism and rebuild order in the international society as a whole.

From this point of view, we applaud Biden for his swift move to return Washington to the Paris climate accord and other key international agreements. He should repair the damaged alliances with major European countries and promote international support for human rights and the rule of law.

The United States should make serious efforts to expand its involvement and engagement in Asia, a region viewed as a key force in shaping the 21st century.

Trump was absent from the East Asia Summit for four years in a row. He stressed Washington’s confrontational stance toward Beijing and sought close personal ties with North Korean leader Kim Jong Un. But he lacked a coherent, well-thought-out, long-term strategy for dealing with the region.

Biden should embark on efforts to reinvent the U.S. strategic focus on Asia as a Pacific nation and build a full-scale network of cooperation in the region.

While the United States and China may be destined to continue their bitter rivalry, no one wants to see them clash head-on. It would contribute directly to the interest of the world community to guide China toward peaceful development and promote a stable prosperity in Asia.

The role of Japan’s alliance with the United States as a regional “public asset” will only expand in the coming years. But Japan needs to map out its own diplomatic vision to realize regional peace instead of depending on the personal relationship between the leaders of the two countries.

The destruction of the world order by the U.S. administration has been halted, at least for the time being. But the leaders of all countries including Japan and in Europe would be better off understanding that the era of relying totally on the leadership of a specific superpower is gone forever.