A fireball, or a huge dazzling shooting star, travels across the western sky above Tokyo on the night of Jan. 20. (The Asahi Shimbun) 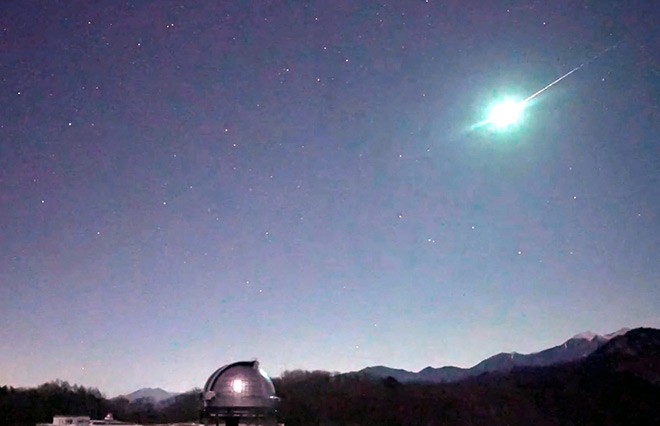 A huge fireball is captured by an Asahi Shimbun camera installed at the Kiso Observatory of the University of Tokyo in Nagano Prefecture at 8:32 p.m. on Jan. 20. (The Asahi Shimbun)

A brilliant fireball lit up the night sky as it streaked through the western sky over Tokyo on Jan. 20 at about 8:30 p.m. and could be seen over a wide area.

The meteor continued shining brightly for more than five seconds at a magnitude of minus 10, almost as bright as that of the waxing moon.

Since the night skies were clear in many prefectures stretching from Tokyo, the fireball could be readily spotted by many people looking up into the sky.

At the same time, the meteor was captured by a camera installed by The Asahi Shimbun at the Kiso Observatory of the University of Tokyo in Nagano Prefecture.

According to a report sent to the meteor observation Sonotaco Network, operated by sky watchers, the fireball traveled from south to north above Yamanashi Prefecture.

The report said that since it likely burned up in the atmosphere, there is little probability that a meteorite will be found.

Last July, another fireball was seen above the Kanto region and a portion of it, which did not burn up in the atmosphere, fell to the ground in Chiba Prefecture. The fragments were dubbed the “Narashino inseki (meteorite)."

According to the National Museum of Nature and Science, three such meteorites have been found in Narashino and Funabashi cities in Chiba Prefecture.