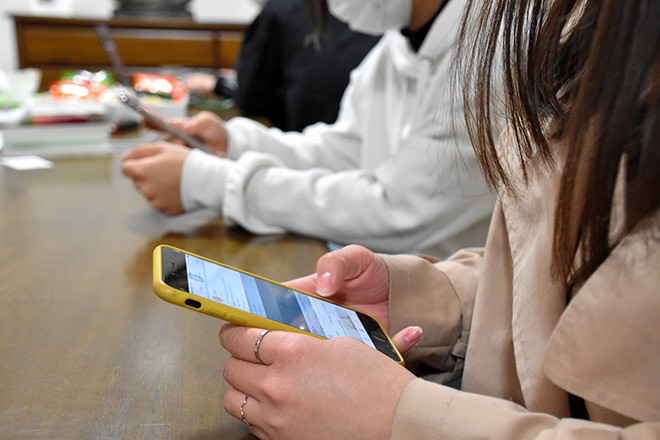 Two Vietnamese trainees turned to a Buddhist temple in Tokyo for help in January after they lost their jobs at a supermarket in Shikoku. (Mari Fujisaki)

Two Vietnamese trainees in their 20s, fired by a Shikoku supermarket at the end of last year as a result of the pandemic economy, came all the way to Tokyo to get help from a support group to find new work.

The Japan-Vietnam Coexistence Support Group, which assisted the two fired workers, is trying to place unemployed Vietnamese trainees at dozens of companies across Japan that are known to be trustworthy employers.

Jiho Yoshimizu, a nun who runs the Tokyo support group, said her group has received thousands of cases seeking help to date. Nearly 100 landed new jobs through the group’s assistance.

Japan has accepted tens of thousands of new foreign technical intern trainees since last summer even though many, like the two Vietnamese trainees who arrived earlier, lost their jobs and have no clue when they can go home amid the COVID-19 pandemic.

The government has extended assistance to jobless trainees since last year, but advocates for foreign workers call for a sweeping overhaul of the technical intern training program, saying the relief step is not sufficient.

The environment surrounding foreign interns is becoming increasingly harsh since the pandemic struck.

About 3,000 trainees were unemployed as of the end of November after their employers went bankrupt or made them redundant, according to the Ministry of Health, Labor and Welfare.

Of these, about 100 could not land new jobs as of this month.

Justice Ministry data painted a grim picture of their situation. As of late last year, about 36,000 trainees were unable to return home due to their country’s travel restrictions even after their training period in Japan was over.

About 1,000 of the trainees stuck in Japan had no jobs.

Foreign technical intern trainees, who come from developing countries to learn professional skills in Japan, are supposed to work only in a job and at a workplace that were already set before their arrival.

But the Justice Ministry relaxed the rules in April to help trainees ride out the pandemic since it has caused them to lose their jobs or become unable to return home.

Trainees are now allowed to take another job for up to a year if it is in 14 specified industries, such as nursing, agriculture and construction, areas where foreigners can work on a newly created visa status known as specified skilled workers.

Despite this, Japan took in 40,000 new trainees between August and Jan. 3, most arriving after November when Japan lifted a global ban on new entrants.

A possible reason that demand persists for foreign trainees is that supervising organizations that accept them can get commissions to assign trainees to member companies, said Ippei Torii, a representative of nonprofit Solidarity Network with Migrants Japan.

Supervising organizations include business groups and chambers of commerce and industry.

“That indicates that there is great demand for trainees out there,” Torii said. “But little assistance has been available in finding them a new job after they were dismissed. They are sort of disposable labor.”

He underlined the need for the government to intensify efforts to rescue them.

Toshihiro Menju, managing director of the Japan Center for International Exchange, a nonprofit foreign affairs institute, who is familiar with immigration policy, said a key reason trainees face enormous difficulty in finding new jobs is that no entity was designated to be primarily responsible for the task.

While trainees could try to find work on their own at public unemployment offices, the reality is that many have a limited command of Japanese and the existing system is not tailored to their needs.

But he said such organizations do not have a strong incentive to go to great lengths to find new positions for trainees upon their dismissal.

The reason is that those organizations will become ineligible to receive supervising fees from the employers if trainees land a job in the 14 industries where specified skilled workers are employed and their visa status is changed accordingly.

Yoshimizu proposed the creation of a new mechanism in which an entity will be commissioned to specialize in job placement for foreign trainees.

Japan’s technical intern training program has long been criticized as a cover for using foreign workers as cheap labor under the name of "job training."

Menju said it is time for Japan to overhaul the system partly to prepare for an intensifying global competition to attract foreign workers in the years ahead.

“How the country will reform the system will determine whether Japan can become a country those workers choose,” he said. “Japan should compile a vision also to secure foreign personnel for a post-pandemic era.”