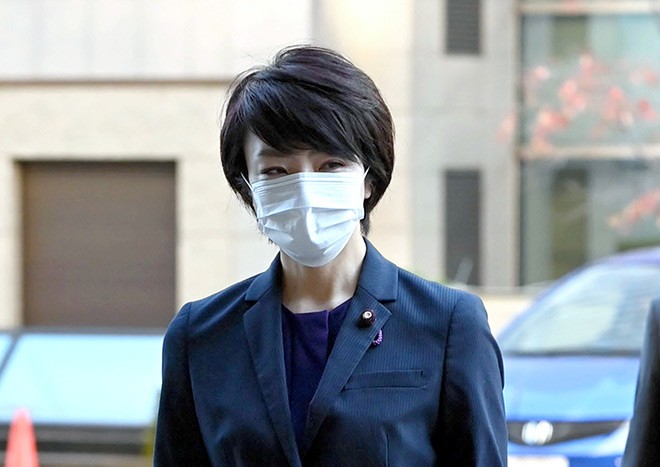 Upper House member Anri Kawai enters the Tokyo District Court in November 2020 for the first time after her release on bail. (Pool)

The Tokyo District Court on Jan. 21 found lawmaker Anri Kawai guilty of bribing local politicians for votes in the 2019 Upper House election and gave her a suspended sentence.

The 16-month sentence, suspended for five years, means she will avoid prison time, but if the guilty verdict is finalized, she will lose her Upper House seat.

The conviction will also likely become another thorn in the side of Prime Minister Yoshihide Suga. As chief Cabinet secretary, Suga and his predecessor, Shinzo Abe, strongly supported Kawai’s election campaign in Hiroshima Prefecture.

She won her first Diet seat in that election.

Kawai, 47, and her husband, Katsuyuki, 57, a former justice minister, were both indicted in the case and left the ruling Liberal Democratic Party before their arrests.

Anri repeatedly denied that she bought votes. She told the court that she gave money to five Hiroshima Prefecture assembly members as a congratulatory gesture or to offer encouragement for their own campaigns.

However, local politicians testified in court that they felt the money was intended to buy their support for Anri in the Upper House election.

Some said they felt the money was illegal because they were told it would never be publicly reported.

Anri’s lawyers later argued that the testimonies of the local politicians could not be trusted because they were going along with what prosecutors wanted them to say in return for not facing any criminal charges themselves.

The court, however, agreed with the prosecutors’ arguments and convicted the rookie lawmaker.

She could also be forced to give up her Upper House seat if her aide’s guilty verdict for violating the Public Offices Election Law is finalized and she is found jointly responsible for the crime.

According to the indictment, Katsuyuki distributed about 29 million yen ($280,000) to 100 local politicians between March and August 2019 in an attempt to garner votes for his wife.

Anri was accused of illegally distributing 1.7 million yen to the five local assembly members.
The couple initially were tried together, but that changed in September 2020 when Katsuyuki fired his lawyers.

That led to a delay in his trial and a separate trial for Anri.

Katsuyuki was justice minister in the Abe Cabinet. He resigned from the post after a magazine reported irregularities concerning Anri’s campaign.