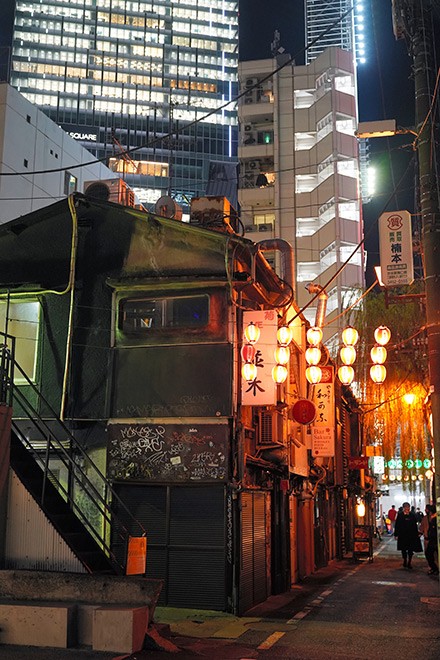 An alley with small restaurants and bars in Tokyo’s Shibuya Ward on Jan. 8, the first day of the second state of emergency for the capital (Asahi Shimbun file photo)

Twenty metropolitan government employees fanned out in search of open bars and restaurants in Tokyo’s major nightlife districts on the nights of Jan. 18 and 19.

But they were not looking for a night on the town.

They were on the hunt for businesses going against the government’s request to close their doors early, issued in a bid to slow the spread of the novel coronavirus.

The punishment for remaining open late is being publicly named as a noncompliant business.

The 20 officials managed to visually inspect 2,027 restaurants and bars in Shinjuku, Shibuya, Ikebukuro, Shinbashi, Kichijoji and Tachikawa districts. Ultimately, they decided that 1,927, or 95 percent, had followed the government’s request to close by 8 p.m.

But with tens of thousands of eateries in the capital, some Tokyo officials have expressed doubts that the government can determine the noncompliant businesses and disclose their names fairly.

The central government recently revised a special law dealing with the pandemic so local governments under a state of emergency can now make the names of noncooperative restaurants and bars public.

Lawmakers are discussing the possibility of introducing punitive provisions in the special law. But in the meantime, with about 87,000 restaurants and bars in Tokyo, including major chains, at least a few metropolitan government officials are raising their eyebrows over the difficulties of the task of fairly naming all the violators.

The visual site inspections expected will amount to a major undertaking for local officials.

“Realistically, it is extremely difficult to go inspect every restaurant and bar,” a metropolitan government official said. “But without doing it, we cannot maintain a level playing field.

“Some businesses may be closed when we visit there, but they may secretly remain open (after 8 p.m.) several days later,” the official added. “We may end up just saying that we will name names and rely on deterrence.”

Another metropolitan government official said the naming-and-shaming measure is, in fact, intended to deter residents from going to noncompliant businesses.

The official said naming noncooperative businesses “will have an impact on the public, who will think that the business is not cooperative.”

The viability of the government’s request “will certainly improve a lot” through that kind of punishment, the official said.

The current special law allows local governors to request and instruct businesses, event organizers, facility operators and others to limit their hours of operation and cancel events. When they do not comply, governors can then name names.

When the central government issued the nationwide state of emergency in April, pachinko parlors and internet cafes that did not suspend operations were the main target of this form of punishment.

Restaurants and bars were not included in the list.

According to data compiled by the Cabinet Secretariat after the state of emergency was lifted, 21 local governments, including Tokyo, issued those kinds of requests to businesses. Five prefectures--Chiba, Kanagawa, Niigata, Hyogo and Fukuoka--issued instructions.

Since revealing the names of certain businesses could lead to limiting private rights, governments have to take a gradual approach to dealing with uncooperative businesses.

According to the notice issued by the Cabinet Secretariat in April 2020, a local government is first required to ask the business to cooperate without publicly naming them.

If the business still refuses to comply, the government is once again required to ask the business to follow the request and warn that it would be publicly singled out for flouting it.

The notice asks local governments to “investigate thoroughly” into whether other businesses nearby are also not complying, so that the punishment is not selective or unfair to certain businesses and facilities.

“It is necessary to ensure a legitimacy of the process,” a Cabinet Secretariat official said.

The notice also asks local governments to listen to experts’ opinions to make sure the risk of an infection cluster is high before proceeding with public shaming.

Under the current state of emergency, the types of businesses local governments can reveal the names of have widened to include restaurants and bars, meaning local officials have a whole lot more ground to cover.

Tokyo officials decided to only publicize the names of pachinko parlors last spring when the capital was under the state of emergency.

Out of a total 770 pachinko parlors in Tokyo, about 70 were publicly identified for remaining open.

(This article was written by Ayako Nakada and Rihito Karube.)