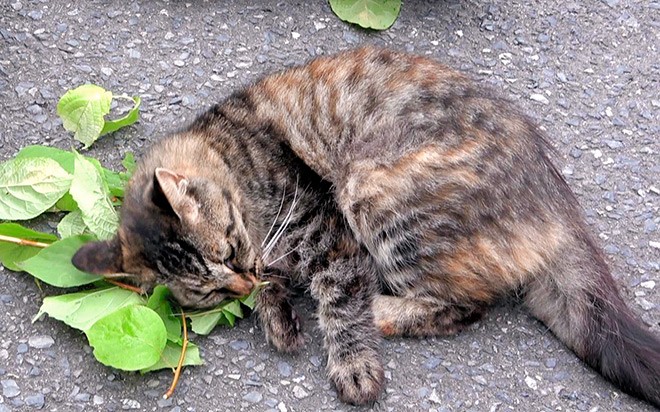 A cat rubs its body against leaves of silver vine. (Provided by Iwate University)

Although cats make it a habit of rubbing their bodies against silver vine, it's long been anyone's guess as to what causes this bizarre behavior.

Now, researchers have found that felines rub against the plant to apply a mosquito-repelling compound onto their fur.

The finding, by a team of researchers at Iwate University, Kyoto University, Nagoya University and the University of Liverpool, was published in the U.S. scientific journal Science Advances on Jan. 21.

In the study, the researchers ground leaves of silver vine and isolated compounds from the leaves. When they let cats sniff each compound, the felines reacted to nepetalactol, the major component of the plant.

The researchers then put filter papers containing nepetalactol on the walls and the ceiling of cages where the cats are kept. The felines did not roll on the floor but rubbed their heads against the walls and ceiling.

The research team concluded that the cats were trying to rub the compound on their bodies.

The researchers also tested the reaction of other species of the cat family to nepetalactol with cooperation from the Tennoji Zoo in Osaka and the Oji Zoo in Kobe. When jaguars, an Amur leopard and Eurasian lynxes at the zoos sniffed the compound, they exhibited the same response as did the cats.

The team also studied the properties of nepetalactol and found that they are effective in keeping mosquitoes away.

In an experiment to confirm its effectiveness against mosquitoes, the researchers applied the compound onto cats’ heads and let 30 mosquitoes buzz around them. The number of mosquitoes that landed on the felines’ heads was reduced by half, compared to when no compound was put onto their heads.

The research team concluded that cats’ reaction to silver vine plays a key role in protecting themselves against mosquito-borne diseases, including one caused by a filaria infection. The team said it wants to use its findings to help develop a new mosquito repellent using nepetalactol.

However, it is not known whether a state of intoxication in cats induced by contact with silver vine has anything to do with the repelling of mosquitoes. The team conducted a blood test and found that the level of beta-endorphin, a neurotransmitter in the brain associated with sensations of pain and pleasure, increased when the felines sniffed the plant.

“Cats are frequently bitten by mosquitoes because they hide behind a bush when hunting their prey,” said Masao Miyazaki, a professor of biochemistry at Iwate University and a member of the research team. “(The state of intoxication) may have an antalgic effect on mosquito bites.”

How cats react to silver vine when they sniff it had been depicted in ukiyo-e woodblock prints during the Edo Period (1603-1867).

The behavior is widely known to be unique to a species of the cat family as an old saying that goes “Neko ni matatabi” (Catnip on a cat). There are also toys for pet cats that contain an extract of silver vine.

But the reason behind their behavior toward the plant had remained largely unknown.