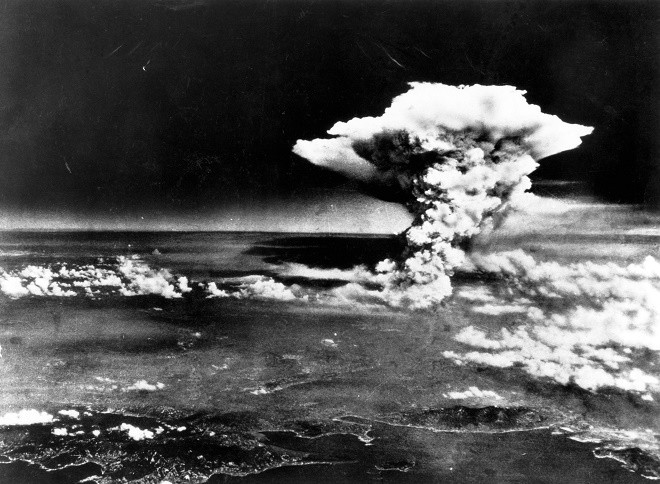 A mushroom-shaped cloud is seen after the first atomic bombing in Hiroshima on Aug. 6, 1945. (Provided by the U.S. Forces)

There once was a Hungarian-born scientist who succeeded in persuading the United States to develop atomic bombs, but failed to stop the bombs from being dropped.

Physicist Leo Szilard (1898-1964) was a Hungarian Jew who fled Nazi persecution and emigrated to the United States, where he became close friends with Albert Einstein (1879-1955).

In 1939, he wrote a letter for Einstein to sign. Addressed to U.S. President Franklin D. Roosevelt, the letter urged him to embark on what would become the Manhattan Project to counter the German nuclear development program.

While working at the University of Chicago, Szilard became one of the physicists who successfully conducted a criticality experiment on a nuclear fission reactor.

Four years ago, author Kazue Odaira, 56, researched Szilard's life in the United States and published her findings in "Todokanakatta Tegami" (The undelivered letter).

Even though Szilard was instrumental in shaping America's nuclear weapons program, he did not see any point in dropping these new types of bombs on Japan, by which time the nation had practically lost most of its firepower, according to Odaira.

"Szilard thoroughly understood the inhumanity of nuclear weapons," Odaira explained. "He asserted that dropping them (on Japan) without prior warning would be unethical."

In the summer of 1945, he issued a petition, addressed to the U.S. president, Harry S. Truman, to refrain from using the bombs.

But because of obstructions from top military brass and other factors, the president never got to see the petition and gave the green light for deployment.

I remember being shocked 20 years ago in the United States when I interviewed some crew members who had been on the Nagasaki bombing mission.

"The war ended quickly, thanks to the atomic bombs," they said. "And that saved the lives of many Americans."

The gap between the accepted American and Japanese perceptions regarding Hiroshima and Nagasaki was so immense, it saddened and pained me.

And I understand that few people in America, if any, recognize Szilard's name today.

The U.N. Treaty on the Prohibition of Nuclear Weapons, which bans not only the possession of nuclear arms but also nuclear tests and threats to use them, came into effect today.

But none of the world's nuclear nations have signed the treaty, not to mention Japan, which relies on the U.S. nuclear umbrella.

I wonder how this absurdity would feel to Szilard, who opposed dropping the bombs on Japan.