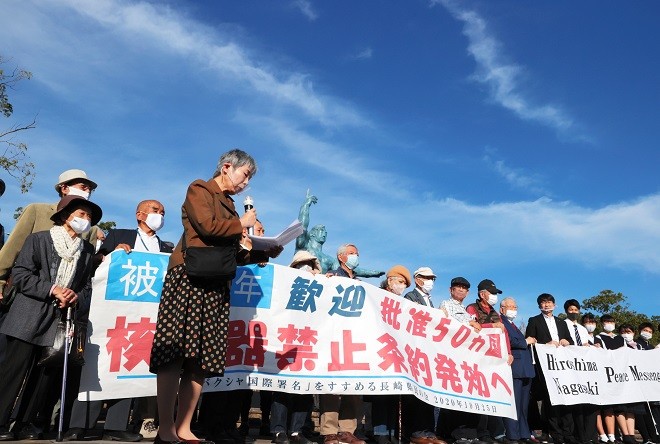 A woman shares her thoughts on abolishing nuclear weapons at a rally on Oct. 25 in Nagasaki to celebrate the 50th country ratifying the Treaty on the Prohibition of Nuclear Weapons. (Asahi Shimbun file photo)

A landmark year has started for the international movement to end the era of collective stupidity when nations threaten others with nuclear weapons, as a treaty aimed at realizing a world free from this threat has become a binding legal instrument.

The Treaty on the Prohibition of Nuclear Weapons, which prohibits nuclear weapon activities, including developing, testing, producing, possessing, using and threatening to use nuclear weapons, entered into force on Jan. 22.

That follows ratification of the treaty by more than 50 countries during the three and a half years since it was adopted by the United Nations General Assembly in 2017.

This is a historic step for the movement to eliminate nuclear arms, achieved with the strong support of international public opinion as well as “hibakusha,” or survivors of the 1945 atomic bombings of Hiroshima and Nagasaki.

It poses serious questions about the future course of Japan, which has yet to sign the treaty despite being the only country that has suffered the devastation of nuclear attacks.

The treaty raises fundamental questions about the justification for the very existence of nuclear arms. It downgrades the status of these weapons from “a necessary evil” to “an absolute evil” and redefines national security as the security of the people, not of the states.

The treaty is designed to prohibit involvement in any activities to capitalize on the destructive power of nuclear arms under an international contract based on the notion that such weapons are useless and harmful. It is intended as an instrument to promote internationally the tenet that there is absolutely no need for nuclear arms so that the world will eventually become ready to discard them altogether.

But nuclear powers and their allies that have refused to join in are not bound by the treaty, which means there will be no immediate removal of nuclear arms.

The treaty is nevertheless expected to help reduce the role of nuclear arms and deter nuclear powers from using their arsenals and pressure them into nuclear arms reductions. With these effects, the treaty could help end the “balance of terror.”

But there is more work to do to hammer out crucial details to make the treaty more effective.

The treaty also says the signatory nations will never undertake to “assist, encourage or induce, in any way, anyone to engage in any activity prohibited” by the treaty. What specific activities under a “nuclear umbrella” are banned by this provision have yet to be clarified, for example.

Another question is this. If a nuclear power joins the treaty in the future, how should the country’s process of discarding its nuclear arsenals be inspected and verified and by which organization?

The Charter of the United Nations, established after the end of World War II, has, in principle, outlawed armed conflict between nations and created a system to allow the Security Council to help prevent such conflict. The world organization has also banned such especially inhumane weapons as biological and chemical weapons and antipersonnel land mines through a series of treaties.

The Treaty on the Prohibition of Nuclear Weapons, which bans “the last weapons of mass destruction,” is an important achievement made through years of efforts by the human race and also a starting point for further progress.

Just before the treaty entered into force, a new president was inaugurated in the United States, a nuclear superpower.

New U.S. President Joe Biden has pledged to reverse the policy of beefing up the U.S. nuclear arsenal adopted by his successor, former President Donald Trump, and return to the nuclear policy agenda of former President Barack Obama, who embarked on pursuing a vision of a “world without nuclear weapons.”

The Japanese government should take this opportunity to reconsider its obstinate refusal to embrace the treaty.

It is still fresh in our memories how Tokyo lobbied the Obama administration not to adopt a policy of ruling out the pre-emptive use of nuclear arms in a bid to maintain the status quo concerning its reliance on the nuclear deterrence provided by the United States.

Even though Japan is protected by the U.S. nuclear umbrella, the government should make its own plan and take necessary actions to change this reality.

Japan should, for example, step up its diplomatic efforts to help denuclearize the Korean Peninsula to reduce the threat of nuclear arms in Northeast Asia. With regard to China’s nuclear arsenals, Japan should take steps to help create an environment that provides incentives for Beijing to become party to the arms reduction framework for the United States and Russia.

These are, to be sure, formidable challenges. But Japan cannot change its reliance on nuclear deterrence as long as it remains a passive actor in the face of nuclear strategies of the major powers.

As the only country that has ever suffered atomic bombings in war, Japan has a duty to make more serious and independent diplomatic efforts for the cause and join the nuclear ban treaty.

As long as it really intends to perform the self-appointed role as a “bridge” between the nuclear powers and the rest of the world, Japan has no other way than attending conferences of the state parties to the treaty to start a real dialogue between the two sides.

At the first such conference, expected to be held later this year, issues related to Article 6, which covers “victim assistance and environmental remediation” for people and areas affected by the use or testing of nuclear weapons, will be discussed as well as the above-mentioned ones.

Japan’s experiences concerning support for hibakusha and the 2011 Fukushima nuclear disaster will be useful for the expected discussions on assistance for the victims and restoration of the environmental damages at the conference.

Last year’s Japan-sponsored draft resolution calling for the elimination of nuclear weapons was approved at the U.N. General Assembly in December, but the vote was marked by a record 35 abstentions. This indicates that Tokyo’s policy of following the United States and refusing to sign the nuclear ban treaty has met with major disappointment among many countries.

It is urgent for Japan to take effective actions to regain its credibility with the international community and figure out ways to make a meaningful contribution to the cause.

The international nongovernmental organization that has been playing a major role in promoting the treaty plans to increase pressure on countries that have signed the treaty but have yet to ratify it with a goal of increasing the number to 100 within three years. Young people in Japan have started working to support the effort.

As the new year started, students and young workers not only in Hiroshima and Nagasaki but also in Tokyo rolled out an internet-based campaign dubbed “GO! Treaty on the Prohibition of Nuclear Weapons Project.”

They use social media to offer information about the significance of the treaty and send out messages of supporters to expand the scope of support for the treaty.

Yuta Takahashi, 20, a native of Hiroshima and sophomore at Keio University who is a core member of the group, says he wants to make “the value of the treaty and (related) changes in the world” known more widely to “build a society where nobody will become hibakusha.”

To change the government’s stance toward the treaty, the Diet needs to engage in more active debate on it.

Takahashi and other campaigners also operate a website called “giin watch,” which asks lawmakers about their positions on the treaty and publish their responses. Only 20 percent of the Diet members have expressed clear support for the treaty.

The young activists plan to take action to make the question of whether Japan should join the treaty a key topic for the upcoming Lower House election to help voters with their choices at the polls.

The day is approaching when no one who has firsthand experience of the atomic bombings will still be alive.

The nuclear ban treaty is a big legacy left to the next generation after 75 years of their efforts to eliminate nuclear arms. The torch should be carried onward to build a new future for the world.