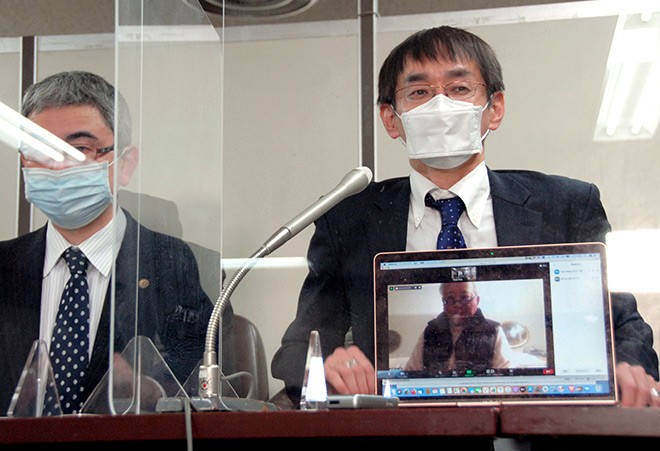 Lawyers and a plaintiff hold a news conference after Tokyo District Court ruled against their dual citizenship lawsuit in Tokyo’s Kasumigaseki district on Jan. 21. (Shunsuke Abe)

The Tokyo District Court on Jan. 21 ruled that a legal provision that effectively bans dual citizenship for Japanese nationals was constitutional.

“It will likely create friction between nations if an individual is allowed to have multiple citizenships,” Presiding Judge Hideaki Mori said in the ruling.

At issue was a provision of the Nationality Law that strips people of their Japanese nationality if they obtain foreign citizenship.

“A Japanese national will lose Japanese citizenship when the individual obtains a foreign citizenship on his or her own will,” the first paragraph of Article 11 of the Nationality Law states.

The eight plaintiffs in the lawsuit argued that the provision contradicts the second paragraph of Article 22 of the Constitution, which guarantees the right of expatriation. They also said the Nationality Law provision violated their right to the pursuit of happiness.

The plaintiffs have lived in Europe because of their work or their families.

They said the provision of the Nationality Law was carried over from a similar law under the Constitution of the Empire of Japan, which prohibited dual citizenship because of military service issues and other factors.

The provision does not accommodate contemporary society, which is much more globalized, the plaintiffs argued.

However, the court sided with the government, which argued that the purpose of the law is to avoid confusion in issues such as diplomatic custody and tax payments.

The ruling said the government’s arguments were “reasonable.”

The court said the paragraph in the Constitution “bans the nation from interfering with an individual who wants to expatriate and renounce his or her Japanese citizenship.”

Judge Mori said there was “not much more than that” in the paragraph, so it does not guarantee an individual’s right to maintain citizenship.

Hitoshi Nogawa, 77, who lives in Switzerland and leads the plaintiffs, remotely joined a news conference held after the ruling.

“The court practically said the law is more powerful than the Constitution,” Nogawa said.

He said they plan to appeal the ruling.

The number of Japanese nationals living overseas has been steadily rising.

According to the Foreign Ministry, about 587,000 Japanese nationals, including permanent residents, stayed abroad for longer than three months in 1989.

According to a survey conducted by the United Nations, about 70 percent of countries in the world allowed their citizens to have dual nationalities, with conditions, as of 2011.