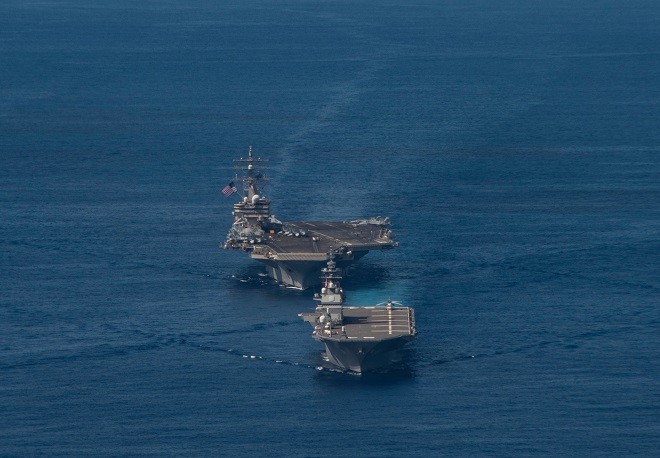 The USS Ronald Reagan aircraft carrier, background, is seen in the joint Keen Sword drill with Japan’s Self-Defense Forces in October 2020 in the Philippine Sea. (Provided by the U.S. Navy)

A newly declassified document released in the finals days of the Trump administration emphasized Washington's intent and resolve to defend Taiwan from Beijing in the event of an emergency.

The memorandum’s disclosure was likely intended to restrict Beijing’s conduct by asserting the U.S. position until the new administration of President Joe Biden can get its footing.

Strongly alarmed at China’s growing presence, the in-house document, dated Feb. 15, 2018, and titled “Cabinet Memorandum on the U.S. Strategic Framework for the Indo-Pacific,” outlines the government’s strategy in the region.

The note refers to Washington’s plans to support Japan and Taiwan by bolstering their military capabilities and declares that the United States will provide support for its partners by boosting countermeasures against Beijing’s espionage activities and cyberattacks.

The memo, once designated as "classified," bears the signature of H.R. McMaster, who was President Donald Trump's national security adviser when it was drafted.

Shortly after it was drafted, the Trump administration began engaging in a trade war with China, underscoring its anti-China policy.

National Security Adviser Robert O'Brien said in a statement that the declassification and release of the document “communicates to the American people and to our allies and partners America’s enduring commitment to this vital region.”

This reference is apparently aimed at pressuring Beijing to refrain from any extreme behavior. It also implicitly calls for the Biden administration to maintain a hard-line stance against China as well as the Free and Open Indo-Pacific (FOIP) strategy.

The memo notes that China is actively seeking “to dissolve U.S. alliances and partnerships” in the Indo-Pacific region to increase its presence, and insists that "China will take increasingly assertive steps to compel unification with Taiwan." It goes on to describe how the United States should respond as well.

In the event that a hostile action occurs, the U.S. military will develop a defense strategy to prevent Beijing from taking control of the skies and seas to protect Taiwan and other areas within the so-called first island chain, which stretches from Okinawa through Taiwan and the Philippines.

A White House source said Okinawa’s Senkaku Islands, administered by Japan but claimed by China, are included within the first island chain.

Though Washington had noted that the Senkakus are covered by Article 5 of the Japan-U.S. Security Treaty, which defines the United States will defend Japan's territory, the nation has pledged only to provide logistical support for Taiwan, such as offering weapons.

The memorandum, however, makes it clear that the United States will defend both Taiwan and the Senkaku Islands in the event of an emergency.

The document cites Japan as a core state for regional integration in the Indo-Pacific area, and states Washington will “empower Japan to become a regionally integrated, technologically advanced pillar of the Indo-Pacific security architecture.”

Under the plan, assistance will be provided to enable Japan's Self-Defense Forces to integrate advanced weaponry into its arsenal.

Washington is looking to enhance cooperation with Japan, Australia and India, while working to mend soured ties between Tokyo and Seoul.

Referring to China’s alleged media manipulation and intelligence projects in other countries, the document states that the United States will “equip U.S. allies and partners to cooperate with the United States in operating against China and countering China’s clandestine activities.”

The document goes on to state that Beijing's activities "undermine U.S. economic competitiveness, and further the Chinese Communist Party's aspirations to dominate the 21st-century economy."

It suggests the establishment of a mechanism to share information on China's undercover programs, and asserts that Washington will offer support for activists and reformists through regional capacity building efforts.

Those policies represent a central pillar in the Trump administration’s series of tough countermeasures against Beijing, and the memorandum, according to a government source, embodies a “paradigm shift” in the U.S. strategy in Asia.

“The strategy now stands as a bipartisan expression of American will,” said a White House source. “I expect there will be significant strands of continuity in the next administration.”

REACHING OUT TO CHINA, BIDEN

The classified document was released immediately before Trump left office on Jan. 20. Behind the unusual decision underlies two key concerns.

One is that the Chinese military has been boosting its presence around Taiwan and the Senkakus.

The number of Chinese military aircraft that have flown beyond Taiwan Strait’s median line hit a record high last year for the past 30 years. Beijing’s naval vessels have navigated the contiguous zone just outside Japan's territorial waters around the Senkakus for more than 300 days, the most ever recorded.

China is expected to be even more active due to the prolonged power vacuum in the United States following the presidential election and transition of power.

Deputy National Security Adviser Matt Pottinger, who played a leading role in shaping Asian policy since the Trump administration’s inauguration, abruptly resigned after the Jan. 6 assault on the U.S. Capitol by Trump supporters.

There were concerns that Biden would also advocate for the FOIP strategy, originally promoted by Trump. A case in point: When Biden spoke with Japanese Prime Minister Yoshihide Suga last November over the phone, he reportedly referred to a safe and affluent Indo-Pacific area, avoiding a direct reference to the FOIP.

Then, on Jan. 28, Biden held his first phone conversation with an Asian national leader since taking office. During the call, Biden and Suga agreed to promote strengthening cooperation between Japan, the United States, Australia and India and clearly mentioned the FOIP strategy.

Although Jake Sullivan, tapped as national security adviser for the Biden administration, has stated that the new government’s policy against China continues to be “standing united with our allies and partners,” any concrete measures have yet to be put forward.

In the coming days, many senior officials responsible for Asian affairs will be selected. It seems that the recently released note aims to pressure Biden into maintaining a hard-line approach toward Beijing as anti-China sentiment flares up in the United States.