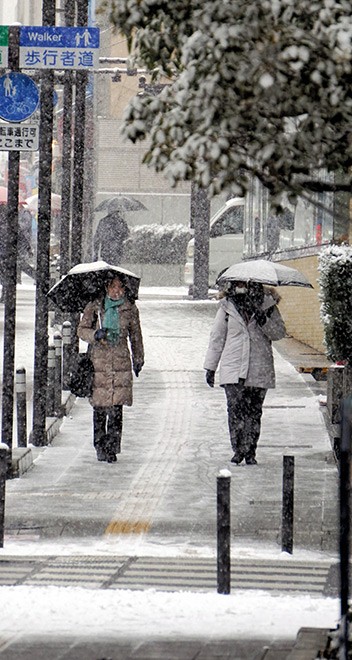 Snow falls in Kofu, the capital of Yamanashi Prefecture in central Japan on Jan. 12. (Jin Naganuma)

Heavy snow was forecast mainly for the mountainous prefectures of Nagano and Yamanashi in central Japan on Jan. 24, but even central Tokyo was expected to wake up to white streets.

Snowfall was expected to start falling from the afternoon of Jan. 23 until the following day due to a stalled front south of Japan.

For the 24-hour period through noon on Jan. 24, the JMA forecast as much as 30 centimeters of snow in mountainous areas of the northern Kanto region and 20 cm in the Koshin region as well as the Hakone, Tama and Chichibu areas of Kanagawa and Tokyo.

The volume of snow will likely increase if temperatures drop lower than now forecast, so heavy snow remained a possibility even for the 23 wards of Tokyo.

The transport ministry issued a special warning on the afternoon of Jan. 23 about becoming stalled on roads due to snow and public transport services being disrupted as a result. It called on people to refrain from unnecessary outings.

Officials urged drivers to use winter tires or tire chains if they must drive somewhere.