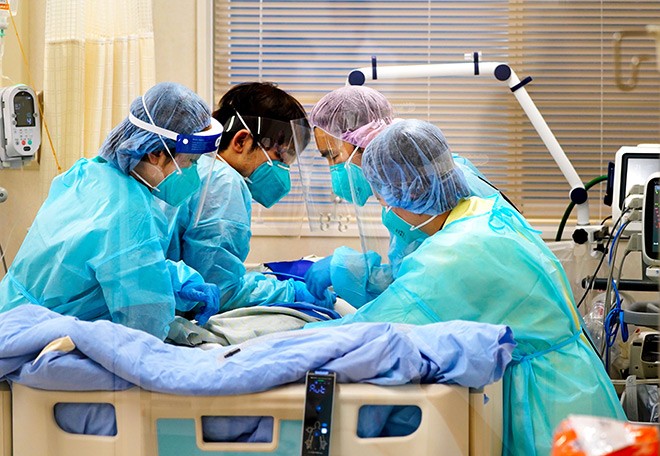 At least 18 deaths of patients confirmed with COVID-19 occurred while they were self-isolating at home, some of whom had been banking on the availability of a hospital bed for treatment.

Figures show that about 35,000 people with the novel coronavirus are currently trying to recuperate at home, prompting health experts to predict the number of fatalities could rise.

The Asahi Shimbun contacted officials of the 11 prefectures now under the second state of emergency regarding the novel coronavirus pandemic and found that of the 18 people who died, 15 did so after December.

Seven of the fatalities occurred in Tokyo. Some cases offered stark confirmation that the health of those confirmed COVID-19 can take a sudden turn for the worse.

One man in his 80s suffering from diabetes did not display any symptoms of COVID-19, but tested positive on Jan. 15. He died two days later.

All seven fatalities in the capital occurred this month, said a Tokyo metropolitan government official, noting that they all involved a sudden deterioration in the patient’s condition.

Among the other prefectures under the state of emergency, Saitama reported that three residents died while self-isolating at home. There were two deaths each in Chiba, Tochigi and Kyoto prefectures and one each in Kanagawa and Osaka prefectures.

Of the 18, six died while seeking a bed to free up at a hospital capable of treating COVID-19 patients.

An Osaka resident in his 50s who was resting at home because he only had minor symptoms died while an ambulance was taking him to a hospital.

Hiroshima and Gunma prefectures, which are not covered by the state of emergency, also reported fatalities among residents self-isolating at home.

The surge in new COVID-19 cases since January has led to a dramatic increase in demand for hospital beds.

In Tokyo as of Jan. 20, there were 6,799 residents awaiting an opening at a hospital or an accommodation facility for those with minor symptoms. The figure represented a six-fold increase over that of four weeks previously.

“It is extremely dangerous to have a situation where the safety of those resting at home has not been secured,” said Satoshi Kutsuna, a doctor at the National Center for Global Health and Medicine. “There is the fear that more people will die. The only way to avoid having those waiting for a hospital bed rest at home is to reduce the number of new cases.”

Kutsuna also offered some tips for family members of patients resting at home about what to look for if symptoms take a sudden turn for worse.

He noted that the health of patients can abruptly deteriorate about a week after symptoms emerge.

“Family members should contact their local public health office if the patient has trouble breathing even after slight movement,” Kutsuna said.

He also suggested using a pulse oximeter that local governments are lending out to check for a sudden lowering of blood oxygen levels.